President Joe Biden finally referred to the situation at the US-Mexico border as a "crisis" over the weekend. But the White House later clarified that the president intended the problems in Central America that caused more refugees to flee, not the US border.

While speaking to reporters on Saturday after a round of golf in Wilmington, Delaware, Biden used the term "crisis" - a description his administration has resisted since taking office. He discussed why he said on Friday that he would keep a Trump-era refugee limit in place, only to change his mind hours later and announce plans to increase the number, USA Today reported.

Biden referred to border surge as a 'crisis' 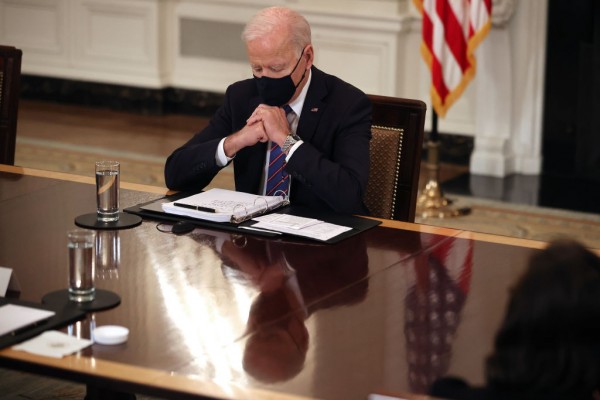 (Photo : Chip Somodevilla/Getty Images)
President Biden And Vice President Harris Meet With Cabinet Members And Immigration Advisors WASHINGTON, DC - MARCH 24: U.S. President Joe Biden delivers brief remarks to the press during a meeting with members of his cabinet and immigration advisors in the State Dining Room on March 24, 2021 in Washington, DC. With the number of migrants apprehended at the U.S.-Mexico border reaching a two-decade high, Biden announced that Vice President Kamala Harris will be leading the White House diplomatic efforts to handle the crisis at the border.

When asked whether the White House already thinks there is a "crisis" at the border, White House press secretary Jen Psaki reiterated the administration's long-held stance. "The president would not consider children refuge from violence, economic difficulties, or other desperate conditions at our border to be a crisis," she said.

Psaki continued, "He believes that the turmoil in Central America, the dire circumstances from which many people are fleeing, is a situation in which we should invest our time and effort. And we must fix it if we want to avoid a further surge of migrants in the coming years."

Republicans pounced on Biden's terminology shift and Psaki's retort. The Republican National Committee tweeted, "Biden's Press Secretary Jen Psaki claims Biden does not see border surge as a 'crisis' after he called it a 'crisis.'"

Many immigrants, many of them unaccompanied minors, have attempted to cross the Mexican border into the United States, putting Biden under growing pressure from Republicans. According to Biden administration officials, U.S. Customs and Border Protection met more than 172,000 migrants attempting to reach the U.S. along the southwest border in March, up from 100,441 in February.

Although Biden's approval ratings have been high during his first 88 days in office, he has received low scores for handling surges of unaccompanied children at the border. A new survey conducted by the AP-NORC Center for Public Affairs Research showed that 40 percent of Americans disapproved of Biden's handling of children who cross the southern border without their guardians, while only 24 percent approved. Thirty-five percent of respondents were undecided.

While President Joe Biden's administration would continue to apprehend undocumented immigrants at the southern border, it would no longer be locking them up, thanks to a new policy that limits the language border officials can use. A recent memo from senior Immigration and Customs Enforcement and Customs and Border Protection (CBP) officials indicated immigration enforcement officials could no longer use the words "alien," "illegal aliens," or "assimilation."

Instead, they would use language that the administration claimed is more humanizing, although the administration deals with a wave of illegal border crossings. In a memo obtained by the Washington Post, CBP's Troy Miller wrote, "As the nation's premier law enforcement agency, we set a tone and example for our country and allies around the world."

Authorities may use the term "integration" instead of "assimilation," as per Daily Mail. Those without lawful status would be referred to as "undocumented," a phrase that immigration advocates have long favored. CBP's 60,000 staff are overseen by Miller, the senior official performing the Commissioner's duties.

During the Trump administration, the director of Immigration and Customs Enforcement, a department that some critics called for abolishment, also released a memo ordering reforms.

For years, the term "alien" has appeared in official government records. "Excluding Illegal Aliens From the Apportionment Base After the 2020 Census," according to a Trump administration executive order issued in July 2020, was intended to exclude them from the congressional count. In a recent tweet, Miller sought to improve the image of border agents who first engage with would-be migrants crossing the border.