Republicans Positive To Win Back Both Chambers in 2022

Republicans are now seeing signs that they will win back the House of Senate and Congress in the upcoming midterm election due to a series of actions done by the Joe Biden administration, according to a published article on The Hill.

Traditionally, Democrats use the midterm election as an offense, or they exhibit their control during this election, but Republicans firmly believed that they now have the control and will have the majority of seats in both chambers. 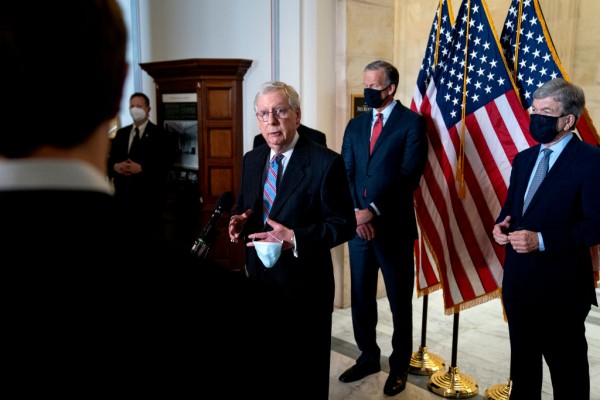 Republicans Positive To Win Back Both Chambers

He also added that the Democratic lawmakers and Biden Administration are on the opposite side, giving them the advantage in the upcoming midterm election.

Agenda Republicans Will Use To Win Back the Chambers

In a recently published article in The Washington Post, the series of actions and decisions of the Biden administration may affect the campaign of the Democratic Party. This includes the reversal of some orders of former President Trump in the immigration policy.

Not yet in the first 100 days in his office as the U.S. president, the Biden administration has already struggled to address critical issues. This includes the increase in unaccompanied migrant children at the Southern Border, massive spending from the White House, sending children back to school amid the pandemic, and recently, the expansion of the Supreme Court from nine to 13 seats.

Dan Eberhart, a Republican fundraiser, said, "Immigration and the loss of control of the border is the top Achilles' heel for Democrats." He also added the many measures in the infrastructure bill that are out of scope.

White House Struggles to Combat Pandemic Due to Vaccine Hesitancy

Polls Before the Election

Even though the recent actions of the Biden administration may affect the campaign of the Democratic Party, several recently released results of the different polls may not support the claims of the Republicans, according to a published article on POLITICO.

The Pew Research Poll released on Friday indicated Biden's strong approval at around 59 percent as he nears his first 100 days in the office. The research center said that this is primarily because of how he handled the vaccination in the country.

Another poll from the Quinnipiac University released on Thursday showed that Biden got a strong mark on the economy, climate change, taxes, and his proposed $2.3 trillion infrastructure plan that includes an American Rescue Plan.

The polling represents Republicans' uphill struggle to win over centrist supporters, who tend to be pleased with Biden's approach to the job so far. However, the president's low approval ratings on immigration, for example, suggest that there are certain flaws that conservatives can manipulate.