On Friday, a suspect rammed his car into two US Capitol Police officers at a barricade outside the Capitol, killing one and injuring the other. After exiting the car and lunging at officers, the suspect was shot by police. Later, he passed away in a local hospital.

The incident at the Capitol killed a police officer 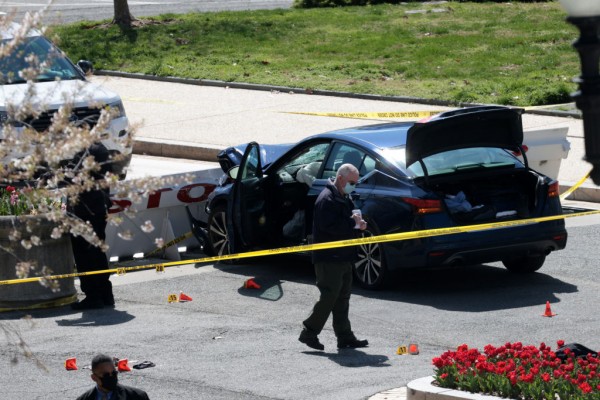 (Photo : Win McNamee/Getty Images)
U.S. Capitol On Lockdown Due To External Security Threat WASHINGTON, DC - APRIL 02: Law enforcement investigate the scene after a vehicle charged a barricade at the U.S. Capitol on April 02, 2021 in Washington, DC. The U.S. Capitol was briefly locked down after a person reportedly rammed a vehicle into multiple Capitol Hill police officers. One officer was killed and one was wounded. The suspect who exited the vehicle with a knife was shot and later died.

Officer William "Billy" Evans, an 18-year police veteran, was named the officer killed on Friday. The other officer is in "safe and non-threatening condition," according to Capitol Police.

Three law enforcement sources told CBS News that the suspect was 25-year-old Noah R. Green of Indiana. He was not on law enforcement's radar, police said. According to a federal law enforcement official and a Capitol Hill source, Green, an African American man, was not on any watch lists and appeared to have acted alone.

According to police, Green reportedly rammed his car into the officers at 1:02 PM, then fled his vehicle and lunged at them. Acting Capitol Police Chief Yogananda Pittman said at a news conference Friday that the officers then shot at the suspect. One of the officers was stabbed in the face, several sources said, although it's unknown which officer was stabbed.

Capitol Police released an initial alert to congress members warning them of a "external security threat." Police issued another warning about an hour and a half later, saying the incident had been "neutralized."

During an afternoon news conference, Capitol Police Chief Yogananda Pittman said the driver stepped out of the car and seemed to be brandishing a knife before being shot by officials. Pittman announced the death of one of the officers at the press conference.

"All I ask is that the public continue to pray for the United States Capitol Police and their families," Pittman said. "Since the events of January 6 and now the events that have happened here today, the US Capitol Police have had an extremely difficult time."

The name of the officer who was wounded was not identified. The event is "not a persistent threat," according to Robert Contee, acting chief of the Metropolitan Police Department.

Pittman noted that Metro Police are still investigating the incident. National Guard troops were seen mobilizing near the scene on video.

The Rev. Patrick Mahoney, one of the witnesses, said he had finished a Good Friday service nearby when he heard three shots. On the Capitol's Senate side, the incident occurred, approximately 100 yards from the building's entrance. The Capitol has begun to open up after the January 6 protests, and barriers that stopped vehicular traffic near that area have recently been lifted, as per KCRA.

Capitol incident expected to reignite a debate in Congress

An incident at the United States Capitol on Friday that killed a police officer is likely to reignite a discussion in Congress about how to protect the nation's seat of democracy after lawmakers' security fears and a pro-Trump mob's January storming of the house.

Since lawmakers and visitors enjoy an open campus, security around the Capitol is often a source of debate. However, security risks often necessitate restrictions.

Lawmakers in both houses had openly lobbied authorities and administrators to answer whether the rest of the barriers would be removed, and they had denounced all discussion of permanent fencing. Republicans and Democrats have also proposed measures to block the fencing from being made permanent, USA Today via MSN reported.

After the barrier was put up in February, Del. Eleanor Holmes Norton, D-D.C., introduced her version. Last week, Senators Chris Van Hollen (D-Md.) and Roy Blunt (R-Mo.) joined her in proposing companion legislation. On the Rules and Administration Committee, which manages the Capitol grounds, Blunt is the top Republican.

With the addition of metal detectors, visitor checks, and vehicle tank traps, access to the Capitol has become more difficult over time. Unlike the White House, which is more difficult to approach and needs scheduled visits, officials have aimed to maintain convenient public access to the "People's House" while still ramping up security. The debate regarding improved Capitol security comes despite a surge in attacks against politicians in recent years, as well as concerns after the January Capitol riot, in which rioters were heard making threats against prominent Democrats as they attacked the house.