On a New York street, an Asian American woman was brutally attacked while heading to church in the middle of the day. An unidentified man approached the 65-year-old woman and violently kicked her, causing her to collapse on the ground at 360 West 43rd Street just before noon on Monday.

The suspect repeatedly kicked the woman in the head in a shocking video footage posted by ABC7NY reporter CeFaan Kim, which has been watched almost 3 million times since it was shared. Kim said the suspect cursed the victim before turning to walk away.

NYPD says 65-year-old Asian American woman was walking to church this morning when suspect assaulted her and said “f*** you, you don’t belong here.” Happened in front of 360 W. 43rd St. 11:40am. Sources say building security guard not only failed to render her aid... 1/2 pic.twitter.com/ZLtQEHHJci

According to Newsweek, a guy in the building's lobby seemed to interrupt the suspect while watching the attack. Two more men entered the frame later, and one of them locked the door while the woman laid on the ground. Brodsky Organization is the property developer and manager of the building where the incident took place, according to the real estate website StreetEasy. The New York Police Department Hate Crime Task Force is investigating the attack and has released a picture of the man in the video who is wanted in connection with the assault. The task force tweeted, "A woman, 65, was attacked by an unidentified man who punched and kicked her about the body and made anti-Asian remarks on Monday, March 29 at 11:40 AM at 360 West 43rd St."

Help identify the below individual wanted in connection to an assault. On Monday, March 29th at 11:40 AM, at 360 West 43rd St, a female, 65, was approached by an unidentified male who punched and kicked her about the body and made anti-Asian statements. Info?☎️1-800-577-TIPS. pic.twitter.com/LkwfYhMCLr

According to reports, the woman was admitted to the hospital with swelling in her face and pain in her left leg. Her health is said to be stable. The incident happened only a few days after New York City Police Commissioner Dermot Shea revealed new Asian hate crime measures at a press conference on March 26.

The surge in hate crimes prompts NY to investigate 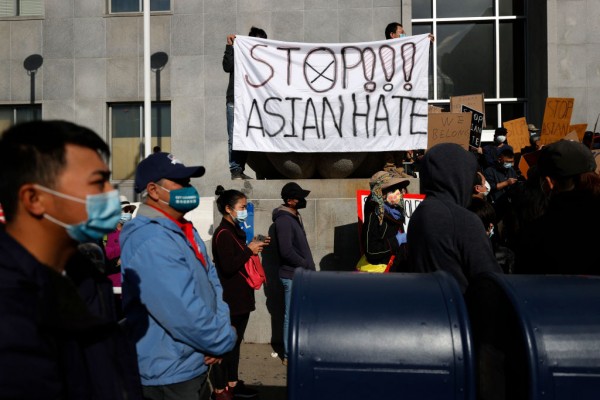 (Photo : Justin Sullivan/Getty Images)
Asian Solidarity Rally Held For Thai Immigrant Vichar Ratanapakdee, Who Died After Being Assaulted On SF Street SAN FRANCISCO, CALIFORNIA - MARCH 22: Protesters hold a sign during a rally in solidarity with Asian hate crime victims outside of the San Francisco Hall of Justice on March 22, 2021 in San Francisco, California. Hundreds of people rallied in support of the family of Vichar Ratanapakdee, a Thai immigrant who died following an assault in downtown San Francisco. Violent crimes against the Asian community in the San Francisco Bay Area are on the rise.

The news comes as the NYPD has seen an increase in anti-Asian crimes this year. To prevent future assaults, the NYPD said it would expand outreach and patrols in Asian communities, including undercover officers.

In a tweet on March 26, NYPD Chief of Patrol Juanita Holmes reaffirmed the department's contribution to fighting attacks. "Hate has no room in New York City," Holmes declared. "Take a look at how we've expanded our efforts to defend Asian-American community in precincts across the city. We have translators available to assist you in over 200 languages."

The New York City Police Department identifies hate crime and bias cases as any offense or unlawful act motivated in whole or significant part by a person's, a group's, or a place's identification with a specific race, color, gender, religion, ethnicity, age, disability, heritage, national origin, or sexual orientation.

The group said on Brodsky's Instagram account that it was aware of the incident and that the staff members who observed it had been suspended pending an investigation. The group also stated that it was attempting to locate a third-party delivery provider involved during the attack.

The NYPD's Hate Crime Task Force has urged those with information to contact them. According to news reports, there have been 33 hate crimes targeting people of Asian descent so far this year. During the COVID-19 pandemic, harassment and attacks against Asian Americans have risen significantly. According to a report, from March 19, 2020, to February 28, 2021, more than 3,795 incidents were reported to Stop AAPI Hate. The figure was "just a percentage of the number of hate crimes that currently exist," the organization said.

Another incident occurred on a Manhattan-bound J train, where two men exchanged punches, and one of them was captured on camera attempting to choke the other, who seems to be Asian. The man passed out in the frame, and the other man walked off the train at Kosciuszko Street Station. The NYPD is now looking at whether the incident was another hate crime targeting Asian Americans in the area, the LA Times reported.

On Monday morning, a crowd gathered in Bensonhurst to protest the recent surge in anti-Asian hate. Two women who appeared at the rally alleged that men spat on them in separate incidents. Marueen Ki, one of the survivors, said her assault happened on 73rd Street and 18th Avenue, just outside her senior center.

Vanessa Lam, who is 16 years old, claimed her offender pulled her into traffic when she was just a few blocks away on 68th Street. "His intention was to cause me pain. He could have killed me if he had succeeded," Lam spoke her thoughts. At the morning rally, lawmakers reaffirmed their pledge to enhance legislation and community training, as per NBC News.