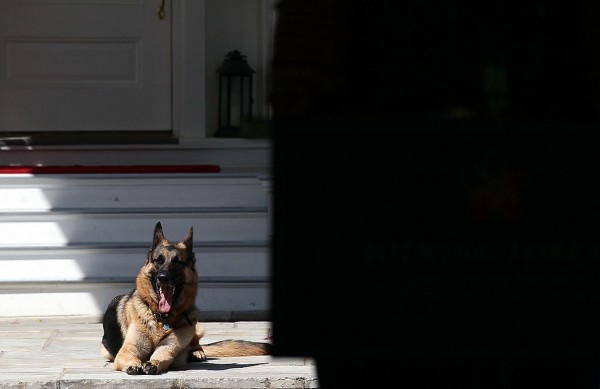 (Photo : Win McNamee/Getty Images)
Michelle Obama And Jill Biden Assemble Gifts For Mothers Of Deployed Troops WASHINGTON, DC - MAY 10: Vice President Joe Biden's dog, Champ, lays down during speechs during a Joining Forces service event at the Vice President's residence at the Naval Observatory May 10, 2012 in Washington, DC. U.S. first lady Michelle Obama and Biden joined with Congressional spouses to assemble Mother's Day packages that deployed troops have requested to be sent to their mothers and wives at home.

According to CNN, the White House South Lawn incident occurred and involved a National Park Service employee. The employee, who was on the job, was treated by the White House medical team, as per CNN.

First lady Jill Biden's press secretary Michael LaRosa confirmed to CNN that Major nipped a person on a walk out of the abundance of caution. However, the WHMU checked the person and then returned to work.

Following a "biting incident" that forced Major to attend extra training, the 3-year-old German Shepherd and his 12-year-old pal Champ were taken to Biden's home in Delaware a few weeks ago. The dogs were aggressive toward White House security and employees, as per the reports. Major charged at several members of the team, but Biden told ABC News' George Stephanopoulous that "Major did not bite anyone and penetrate the skin."

In an attempt to explain his dog's conduct, Biden said that Major was protecting the president, The Sun reported. The first instance of biting occurred on March 8, when Major injured a Secret Service agent.

At a March 9 press conference, White House Press Secretary Jen Psaki said, "Major was surprised by an unknown person and responded in a way that resulted in a minor injury to the individual." The White House Medical Unit took care of the injuries, Psaki assured, adding that no further treatment was needed.

By March 23, the dogs had finished their training and returned to the White House. In 2018, the Biden family adopted Major.

The first lady's press secretary claimed that Biden's dog is still adjusting to his new surroundings. The incident reported was the second nipping event for Biden's 3-year-old German Shepherd.

The first incident caused Major and Biden's other dog to temporarily return to their home in Wilmington, Delaware, where the dogs got some training. According to White House press secretary Jen Psaki, the Wilmington trip was arranged because Jill Biden was flying, and it was not a punishment for Major.

After the first attack, the president told ABC News that he always felt Major was a 'good boy' who was only having trouble adjusting to his new surroundings. Joe Biden insisted that Major is a sweet dog, saying, "You turn a corner and there's two people you don't know at all. And he moves to protect."

Major isn't the first German Shepherd named Major to live in the White House, but he is the first rescue dog to do so. According to the Presidential Pet Museum, President Franklin D. Roosevelt's dog Major "was used to chase White House maids to the point that they had to use their brooms and dust mops to keep him at bay," and was engaged in at least three biting incidents, as per the NBC News.