The Biden administration and private companies are reportedly working on a "vaccine passport" that will allow Americans to resume pre-pandemic activities like travel and shopping by providing evidence of COVID-19 vaccination. 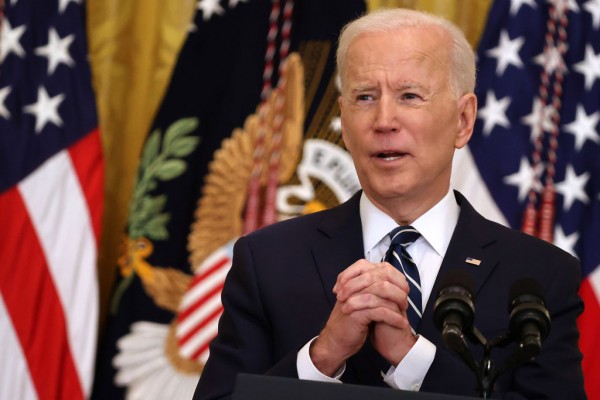 (Photo : Chip Somodevilla/Getty Images)
Joe Biden Holds First Press Conference As President WASHINGTON, DC - MARCH 25: U.S. President Joe Biden talks to reporters during the first news conference of his presidency in the East Room of the White House on March 25, 2021 in Washington, DC. On the 64th day of his administration, Biden, 78, faced questions about the coronavirus pandemic, immigration, gun control and other subjects.

The 'vaccine passport' is critical to the administration's aim of ending the lockdown and returning to a sense of normalcy by the end of the year. It would almost likely be available for free on smartphones. According to The Washington Post, vaccinated Americans will be able to flash a scannable message, and those without phones will be able to print out a code on a sheet of paper.

However, the government faces several problems, including issues over privacy and accessibility for those who are socioeconomically vulnerable. The developers must also ensure that the applications are secure and that no fake digital vaccine passports are released. Another dilemma is how long immunity lasts and whether COVID-19 variants must be considered.

It's still uncertain if the administration will follow the development of a unified passport, as per Daily Mail. According to the Biden administration, at least 17 different vaccine passport initiatives are currently being developed by public and private entities.

The WHO is working on developing a "smart vaccine certificate." Officials in New York State have released a digital pass that residents will use to prove vaccination or a negative COVID-19 result. Significant entertainment venues such as Madison Square Garden and Albany's Times Union Center will embrace the Excelsior Pass. The software works similarly to a handheld airline boarding pass, except it uses a secure QR code that can be saved on a smartphone or printed.

The technology, according to officials, does not store or track private health data inside the app. Other countries and organizations, such as the European Union, China, and Japan, establish their vaccine passports. Public activities have resumed in Israel, a country that has vaccinated its population faster than any other in the world, but they are confined to those who have been vaccinated. Attendees had to display a 'Green Pass,' a government-issued document proving they had received all doses of the vaccine more than a week before the event or that they had recovered from COVID-19 and were considered immune.

Uncertain if vaccine passports will be accepted in other country

The White House is developing a vaccine passport scheme in collaboration with various government organizations, including the Departments of Health and Human Services and technology and travel firms. Airlines and industry organizations have encouraged the White House to take the lead in establishing a national proof-of-vaccination program.

The COVID-19 vaccine passports should be available for free through mobile applications. Developers also confirmed that Americans without smartphones would be able to print the passports, IBT reported.

However, whether vaccine passports will be generally adopted in other countries is uncertain. During a meeting this week, the Biden administration is likely to include more information about the system, according to two people familiar with the conversations.

The administration's vaccine passport service was revealed after New York Governor Andrew Cuomo announced the country's first vaccine certification, the Excelsior Pass, on Friday. Cuomo said in an announcement, "Today, we launched Excelsior Pass, a free portal that helps companies and individuals to instantly obtain safe evidence of a recent negative COVID-19 test or vaccine. It's a first-of-a-kind mechanism to assist New York in fighting COVID-19 and reopening our economy safely."