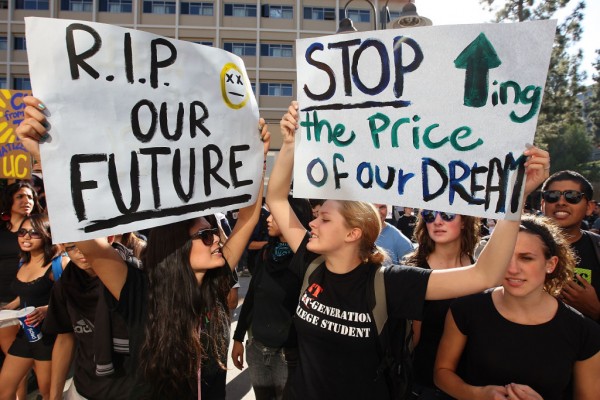 (Photo : David McNew/Getty Images)
LOS ANGELES, CA - NOVEMBER 19: University of California Los Angeles (UCLA) students Andrea Flores (L) and Kendall Brown (R) and other UCLA students and supporters demonstrate outside the UC Board of Regents meeting where members voted to approve a 32 percent tuition hike next year on November 19, 2009 in Los Angeles, California. Undergraduate fees for students at the California university system would be increasing by about $2,500. It is the second day that demonstrators, including students from other UC campuses, have gathered to try to dissuade the board from approving the proposed increase. Massive cuts to balance the state budget have squeezed education funds in California.

Some have viewed the stimulus' final clause - tax-free student loan repayment - as raising the chances that Biden will now cancel student loans by executive order. Let's be clear, so you know what's going on:

Although the president is under pressure to terminate student loans in the aftermath of the pandemic, this stimulus bill will not do so. Student loan forgiveness, on the other hand, would be tax-free, as per Newsweek.

In the United States, nearly 45 million individuals have student loans. Some of them have income-driven repayment arrangements, which allow them to make contributions depending on a percentage of their taxable income. The outstanding debt is canceled after 20 to 25 years, and forgiven debts are counted as revenue. This could end in a hefty tax bill in the thousands of dollars. However, as part of the relief program, the Student Loan Tax Relief Act would reduce taxation on forgiven student loans for a short period.

The freeze on taxing forgiven student loans is set to last until 2025 under the American Rescue Package, but it may be extended after that. Biden declared in January that he would extend the ban on repaying federal student loans to at least October. Also, his executive order extended the forbearance on interest accumulation.

Will college students get a stimulus check?

There is one major difference from the last round of payments: college students are now entitled to accept them. As part of the $2.2 trillion Coronavirus Aid, Relief, and Economic Security (CARES) Act, the majority of Americans got a $1,200 stimulus check in March 2020.

On the other hand, adult dependents were not eligible for relief checks, which meant that most college students, many older persons, and other individuals who rely on others financially were not eligible. As a result, in the wake of a global recession, some of America's most vulnerable populations were left empty.

These same populations were unavailable for the second round of $600 relief checks passed in December 2020 as the pandemic intensified and death tolls increased. With the third round of checks, this was fixed, as per Elite Daily.