As the Senate has already passed the COVID-19 relief bill, many Americans can receive up to $1,400 stimulus checks as early as March 13. The Senate-approved bill also includes expanded unemployment benefits and increased child tax credits.

Over Republican resistance, the Senate passed a broad pandemic relief package on Saturday, bringing President Joe Biden closer to a historic political win that will provide most Americans with $1,400 checks and direct billions of dollars to colleges, state and local governments, and corporations.

After a long overnight debate session, the bill passed 50-49 on a party-line vote and now goes back to the House for final passage, which could happen early next week. Democrats claimed that their "American Rescue Plan" would assist in the fight against the pandemic and recover the economy.

According to WTHR, the $1.9 trillion package was opposed by Republicans as being too costly. Since last spring, Congress has passed five previous virus bills worth about $4 trillion. 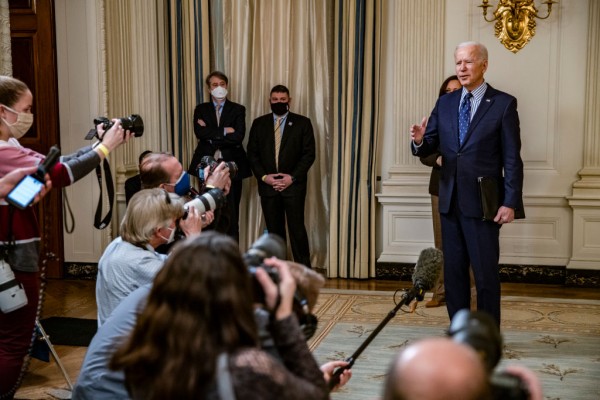 (Photo : Samuel Corum/Getty Images)
WASHINGTON, DC - MARCH 06: President Joe Biden stops to answer questions from reporters after speaking in the State Dining Room with Vice President Kamala Harris behind him following the passage of the American Rescue Plan in the U.S. Senate at the White House on March 6, 2021 in Washington, DC. The Senate passed the latest COVID-19 relief bill by 50 to 49 on a party-line vote, after an all-night session.

Read also: Stimulus Checks: Between the Payments in Each Round, Here Is a Major Difference You Should Not Miss

When the IRS could send your next stimulus check

Given the gaps between the Senate and House versions of the COVID-19 relief bill, the bill will return to the House early next week for final passage before being sent to President Biden for signature, CBS News via MSN reported. Based on the timeline for the previous round of checks, the IRS could begin distributing the checks within days to one week after the bill is signed into law - perhaps as early as the weekend of March 13.

However, the possibility of further changes to the qualifications for those obtaining the checks complicates matters. Also, checks may be accepted and ready to go in the midst of tax season, causing the IRS' processing and distribution schedules to be disrupted, as per Newsweek. Though some Americans may collect checks by the end of the month, the first two rounds of stimulus payments have been delayed, and many Americans have yet to receive their checks.

Sorry, not everyone may qualify for the third stimulus check

A proposed Senate bill approved on Saturday indicated fewer Americans would get a third stimulus check, as per Yahoo Finance. The new plan was introduced to get Democrats in the Senate together, who were split over the stimulus check phase-out rate so that President Biden's $1.9 trillion COVID-relief bill could pass. The House of Representatives originally approved the president's stimulus plan, but due to this and other amendments enacted by the Senate, they would have to vote on it again.