The U.S. Senate has finally reached an agreement to include a $1.9 trillion coronavirus relief package in the stimulus bill. The debate started Friday, which includes the reading of the 628 pages bill.

After more than 24 hours negotiation, Senate Democrats have decided to increase the length of federal unemployment benefits to help those who are disabled to aid the economy's recovery in the aftermath of the Covid-19 pandemic. However, the agreement reached would not match the bills proposed by the House of Representatives last week, with the proposed weekly rate being reduced from $400 to $300. 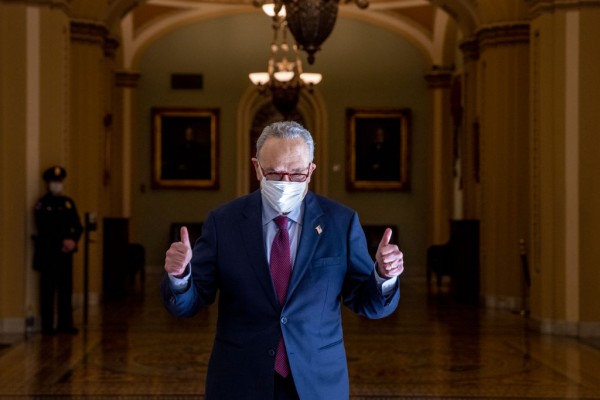 (Photo : Tasos Katopodis/Getty Images)
WASHINGTON, DC - MARCH 06: U.S. Senate Majority Leader Sen. Chuck Schumer (D-NY) gives a thumbs up after leaving the senate chamber at the US Capitol on March 06, 2021 in Washington, DC. The Senate passed the latest COVID-19 relief bill by 50 to 49 on a party line vote, after a all night session.

This long-awaited agreement offers $1,400 stimulus payments for individuals earning less than $75,000 a year, with married couples earning less than $150,000 receiving two $1,400 checks. President Biden's approval for the deal has been stated by the White House press office, with White House press secretary Jen Psaki adding, "The President supports the bipartisan agreement, and is grateful to all the Senators who worked so hard to achieve this result."

It extends supplemental unemployment benefits until September, allowing the vast majority of unemployed people to postpone unexpected tax bills, as per the Independent via Yahoo. More notably, this deal helps us press on with the American Rescue Plan, which includes $1400 relief checks and the money we need to complete the vaccination rollout, open our schools, assist pandemic victims, and more. Although the White House favors the compromise, it is unknown if they would receive enough Senate support to pass the bill with the majority vote.

On Friday, a group of Democratic senators voted with all Senate Republicans against Sen. Bernie Sanders' proposal to raise the federal minimum wage to $15 per hour. When the Senate debated President Joe Biden's COVID-19 stimulus package, the Vermont independent attempted to apply the amendment to the $1.9 trillion bill. According to USA Today on MSN, the effort was defeated by a vote of 58-42, with eight Senate Democratic caucus voting against it.

Democrats and Republicans made adjustments to an unemployment benefits extension. The result of the vote could jeopardize any Democratic efforts to increase the minimum wage, which was included in Biden's original stimulus bill, and passed the House last week. Members of the Democratic caucus who voted against the bill include:

Read also: Stimulus Checks: Between the Payments in Each Round, Here Is a Major Difference You Should Not Miss

Democrats want to approve President Joe Biden's American Rescue Plan with a clear majority vote, which means they won't require Republican support. The stimulus bill to raise the minimum wage to $15 per hour was included in Biden's proposal. Still, Senate parliamentarian Elizabeth MacDonough determined last week that it did not fulfill the reconciliation conditions.

Lawmakers have a short deadline to get the bill to Biden's desk until the expiration of key unemployment benefits on March 14. Both Schumer and California House Speaker Nancy Pelosi have shared optimism that the bill would be passed by then, as per Newsweek via MSN.

Read also: Wonder If You Are Old Enough to Receive Stimulus Check? These Rules Could Change the Payments