Nearly Half of Trump Voters Would Abandon GOP If He Builds Own Party, Says New Poll

A recent poll on Sunday reveals that if former President Donald Trump created his own political faction, 46% of Trump's voters would abandon the Republican Party. At the same time, some GOP members appear to split with the former President. 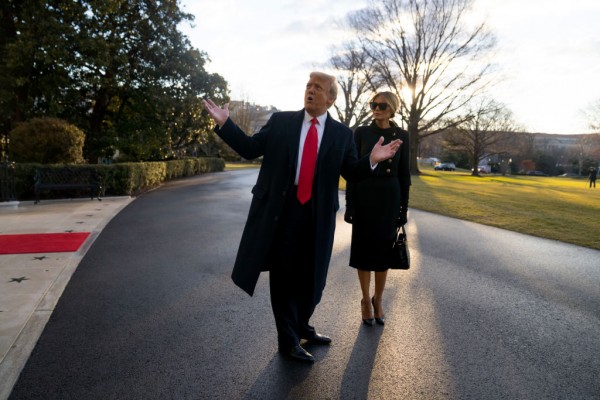 (Photo : Eric Thayer/Getty Images)
WASHINGTON, DC - JANUARY 20: President Donald Trump and first lady Melania Trump depart the White House on January 20, 2021 in Washington, DC. Trump is making his scheduled departure from the White House for Florida, several hours ahead of the inauguration ceremony for his successor Joe Biden, making him the first president in more than 150 years to refuse to attend the inauguration.

The Suffolk University/USA TODAY poll reveals 27% of respondents will stay with the GOP even though Trump formed his own party, some who voted for Trump in 2020, but another 27% say they are uncertain what they will do.

Shortly after Trump left office on January 20, rumors circulated that he was considering forming his own party that focused on the 'America First' platform independently from the GOP, as per Daily Mail. However, when the Senate impeachment trial loomed and concerned Republican senators might turn against him, his staff immediately knocked out certain whispers.

Arkansas Governor Asa Hutchinson said Sunday that Trump 'would not determine our future' and said he would not support him if the former President runs for the White House again in 2024. "He will only define our party if we let him define our party," the Governor warned.

A margin of plus or minus 3.1 percentage points appeared in the poll, while 54% of those polled suggest they have more loyalty to Trump than they do to the Republican Party. This year, the Conservative Political Action Conference is another example of the GOP leaning further towards the party's Trumpism.

The Conservatives' annual meeting will begin in Orlando, Florida, on Thursday and conclude on Friday. On the final day as the keynote speaker, Trump will make remarks at the meeting, his first public speech since leaving Washington on January 20. On the other hand, former Vice President Mike Pence refused an invitation to appear at this year's conference.

Trump to cement grip on the Republican party

Next weekend, Donald Trump will make his first big public speech at the Conservative Public Action Conference since leaving the White House. According to the Telegraph, by attending the conservative calendar's signature event next weekend, the former President will strengthen his hold on the Republican party.

In his first public address since his address to supporters ahead of the January 6 Capitol Riot, Trump will be one of the speakers at the Conservative Public Policy Conference in Orlando, Florida. In the Republican calendar, the meeting, known as CPAC, is arguably the most critical event.

Lara Trump: Donald Trump is the head of the Republican Party

When addressing his upcoming speech at CPAC, Lara Trump, Donald Trump's daughter-in-law, and former senior advisor called the former President the "head of the Republican Party."

During a Fox News' Justice appearance with Judge Jeanine on Saturday night, Lara Trump said: "Look, he is the head of the Republican Party," referring to Trump. The former President is the one everyone will continue to look to help them get across the bridge, she added.

Trump is scheduled to speak at CPAC in Florida next week in his first major public appearance after leaving office in January.

In previous years, Trump appeared at CPAC, although it was uncertain whether he would speak until Saturday at the conference after his 2020 presidential election defeat.

This year, the annual conservative conference, which typically happens near Washington D.C., was relocated to Florida to circumvent strict restrictions on coronavirus imposed in the region. In late 2020, statewide coronavirus restrictions were lifted in Florida, Newsweek via MSN reported.