Amazon neglects the health and safety of employees 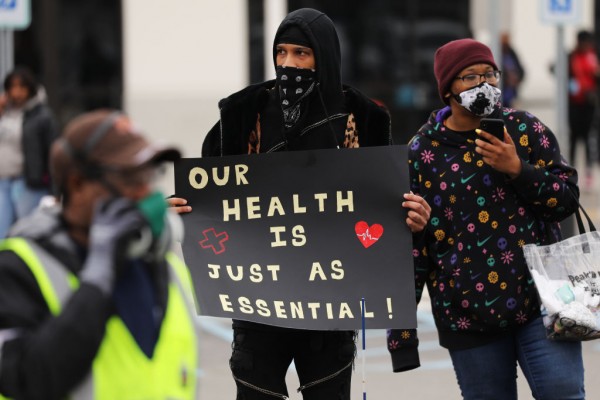 (Photo : Spencer Platt/Getty Images)
NEW YORK, NEW YORK - MARCH 30: Amazon employees hold a protest and walkout over conditions at the company's Staten Island distribution facility on March 30, 2020 in New York City. Workers at the facility, which has had numerous employees test positive for the coronavirus, want to call attention to what they say is a lack of protections for employees who continue to come to work amid the coronavirus outbreak.

On Tuesday, attorney Letitia James filed a case against Amazon. The Attorney General accused the e-commerce giant of failing to institute adequate and reasonable protective measures for its workers during the COVID-19 pandemic.

The suit was filed in state court and said Amazon violated laws by neglecting frontline workers' safety from COVID-19 at facilities in Queens and Staten Island. James argued Amazon had not implemented adequate sanitization procedures to account for safety, among other reported violations.

According to Fox Business, the lawsuit said Amazons' 'disgraceful' neglect for health and safety requirements threatened severe illness and caused grave harm to thousands of workers. Amazon's facilities posed a continued significant and particular harm to public health, as per the lawsuit.

Amazon had faced widespread criticism over workplace safety policies instituted amid the pandemic at its fulfillment and delivery centers. Last year, James' office launched an investigation into amazon's facilities after the company fired Christian Smalls, a worker in the Staten Island facility, who led an employee walkout against its safety requirements.

According to the lawsuit, the benefit came to the detriment of Amazon frontline staff, who have faced significant risks of exposure to the virus, Bloomberg on MSN reported.

In Tuesday's complaint, James alleged that the company had neglected to do adequate sanitation and disinfection since the pandemic's onset last March. It had not told employees who have been in touch with infected colleagues; and retained productivity measures that do not allow employees enough time for sanitation and social distancing.

According to the complaint, the company fired one worker at its Staten Island warehouse and issued a written warning to another after voicing concerns about pandemic safeguards.

Amazon raised more than $130 billion in income from online sales, James added, marking 35 percent growth from its pre-pandemic earnings and a 10 percent higher rate of growth than in previous years. The benefit came at the expense of Amazon frontline staff, who, according to the complaint, have faced significant risks of exposure to the virus.

For the handling of warehouse and delivery workers, Amazon has long faced criticism. In October, the company revealed that between March 1 and September 19, months after state attorneys general and activist employees called for the publication of this detail, almost 20,000 of its frontline employees had tested positive or were considered positive for coronavirus.

The data released was a turnaround for Amazon, which kept a comprehensive state-by-state reporting of coronavirus infections from being issued for months, as per CNET. Many employees worked together to collect projections of the number of illnesses without these details, using the company's message notifications.