New revelations from a call between Donald Trump and House Minority Leader Kevin McCarthy allegedly indicated that the former president was unwilling to call off the MAGA mob during the January U.S. Capitol riot. 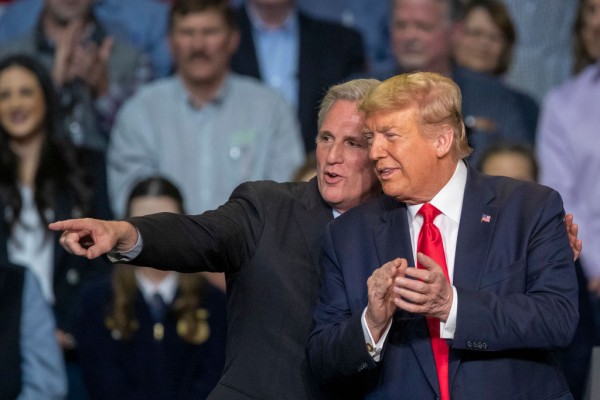 (Photo : David McNew/Getty Images)
BAKERSFIELD, CA - FEBRUARY 19: House Minority Leader Kevin McCarthy and U.S. President Donald Trump attend a legislation signing rally with local farmers on February 19, 2020 in Bakersfield, California. The presidential signing ushers in his administration's new rules altering how federal authorities decide who gets water and how much in California, sending more water to farmers despite predictions that the changes will further threaten endangered species in the fragile San Joaquin Delta.

One unnamed GOP lawmaker said, "He is not a blameless observer, he was rooting for them." Republican members of Congress, who were CNN insiders, claimed that the call's contents indicated that Trump had no interest in calling off the deadly riot.

Multiple Republicans felt the call's details were essential to the hearings as senators planned to decide Trump's fate since they claimed it painted a troubling illustration of Trump's lack of action during the attack. At least one of the people who talked to CNN took detailed notes of McCarthy's call being recounted.

According to CBS SF BayArea, Trump's lawyers argued that he attempted to calm the rioters with a series of tweets, while the Capitol riot occurred at the impeachment trial Friday. He also criticized the then-Vice President Mike Pence and waited hours to warn rioters to directly leave the Capitol. Still, his lawyers cherry-picked his tweets, focusing on his appeal for followers to "remain peaceful" without mentioning that he also mocked Pence.

Will Democrats call McCarthy as a witness in Trump's impeachment trial?

It's unknown to what point the House Democratic impeachment administrators were aware of this new information or whether the team considered calling McCarthy a witness. In the ongoing impeachment trial, the administrators have kept the possibility of calling witnesses, but that option remains impossible as the trial winds down, as per CBS.

Since attacking the process as a 'witch hunt' and calling Democratic managers who argued it hypocritical, Trump's impeachment lawyers ended their defense of the former president Friday after fewer than three hours.

Three separate Trump lawyers spoke Friday, following elected Democrats who, in their remarks, used the word 'war' and arguing that Trump had a constitutional basis for his pre-riot address in which supporters were ordered to go to the Capitol to take on 'poor' Republicans.

Wrapping up his points, Atty. Bruce Castor gave back about 13 hours allotted to the Democratic majority, concluding with a partisan blast, Daily Mail reported.

Read also: Sanders: It Is Bad Politics That Those Who Got Their Stimulus Check From Trump Will Not Get Them From Biden

Castor said the majority party promised to deliver and unify more coronavirus relief. "But instead, they did this."

"We will not take most of our time today, us of the defense, in the hopes that you will take back these hours and use them to get delivery of COVID relief to the American people," he added.

Trump's team of impeachment lawyers summoned their client's angry speaking style as they started his defense Friday against what they called a 'sham impeachment' they dubbed a 'witch hunt.'

With no public proof that the trial moved enough Republican senators to prosecute Trump, counsel Michael van der Veen came out swinging with legal claims that seemed to channel his client's previous Twitter indignation. They branded the impeachment as a 'horrific violence' and boosting Trump targets such as the Russia investigation and Antifa.

Read also: Impeachment Trial: Trump Lawyers Argue 'Majority in the House' Is Afraid of Facing Him as Opponent in 2024