Australia would not fully reopen its borders even if most of its population became immunized this year as planned, a senior health official claims.

Australia would not fully reopen even if many had been vaccinated 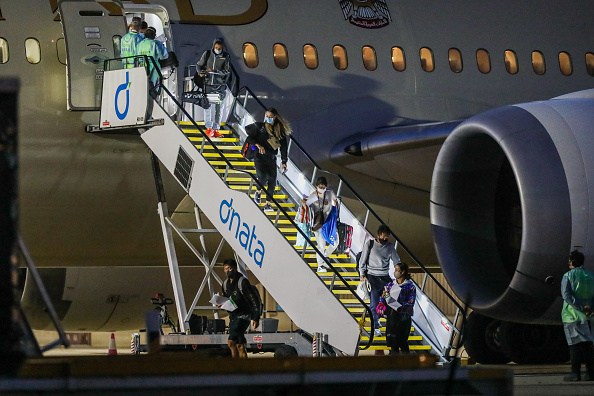 (Photo : Asanka Ratnayake/Getty Images)
Tennis Players And Officials Arrive In Melbourne Ahead Of 2021 Australian Open MELBOURNE, AUSTRALIA - JANUARY 14: Tennis players and their support teams are seen disembarking Flight EY460 carrying tennis players and their support teams participating at the Australian Open at Melbourne Jet Base adjoining the Melbourne International airport on January 14, 2021 in Melbourne, Australia. All players and staff arriving in Melbourne for the Australian Open must complete 14 days of hotel quarantine and will be housed across three hotels; the Grand Hyatt, Pullman Albert Park and View Melbourne. Quarantining players will be able to leave their rooms for up to five hours a day, but only to attend dedicated quarantine training venues set up at Melbourne Park, the National Tennis Centre and Albert Reserve. Players will only be permitted to train once their day two COVID-19 comes back negative. All other staff and officials will need to remain in their rooms at all times for the 14 days of quarantine. The 2021 Australian Open will be the largest international sporting event to be held in Australia since the beginning of the coronavirus pandemic.

The statement decreased hopes, which airlines raised by saying that travel from and to Australia would resume as early as July.  After being asked about the COVID-19's escalation in other country, Department of Health Secretary Brendan Murphy made the prediction.

Murphy spearheaded the nation's early action to close its borders last March, as per BBC. He told the Australian Broadcasting Corporation Monday, "I think that we'll go most of this year with still substantial border restrictions."

Dr. Murphy added that they do not know if vaccinating a lot of the population would prevent coronavirus transmission. Besides, the secretary believes quarantine requirements for travelers would continue.

Permanent residents, citizens, and those who are exempted are allowed to enter Australia after completing the 14-day hotel quarantine at their own expense. Earlier this month, Qantas, Australia's national carrier, reopened after saying it expected international travel to restart from July 2021.

Australia's COVID-19 record is far fewer than other countries

In late February, a vaccination scheme is set to begin in the country, wherein local authorities resisted calls to speed up the process. They gave more time for regulatory approvals.

So far, Australia has reported 909 coronavirus-related deaths and nearly 22,000 COVID-19 cases. These records are far fewer than many other nations. On Monday, the nation reported zero local transmission of infections.

The swift border lockdown has contributed much to Australia's success, which affected travelers from China in February 2020, as well as the hotel quarantine system for people who will enter the country.

Hotel quarantine breaches, including the second wave in Melbourne, caused local outbreaks. Other outbreaks like in Sydney, where 200 people became infected to COVID-19, prompted internal border closures between states and strict restrictions during the Christmas season.

Victoria would allow entry to Sydney residents outside of designated areas, the state said on Monday, following the decline of coronavirus cases. Australia's international borders remain closed to travelers, but there are exemptions, and all arrivals must complete mandatory quarantine, as per Republic World.

Daily Mail reported that all travelers into the United Kingdom face Australia-style quarantine in hotels under plans in Britain's further lockdown. Officials were asked to prepare for the quarantine hotels, where they would self-isolate before entering the country.

The new protocol would further reduce the risk of coronavirus entering the UK and destructing the vaccination drive, amid concerns that new strains could be resistant to the jabs. The UK variant came after others emerged in Brazil and South Africa. Scientists warned more are likely to develop and could import from around the world.

On Friday, the Independent Scientific Advisory Group for Emergencies urged for a change in quarantine protocols, saying the existing system of 'in effect, voluntary self-isolation; must be changed as a matter of urgency. Travelers could use public transport after arriving in the UK. However, they were supposed to quarantine again for up to ten days, which the majority are not aware of having faced any checks.