The House of Representatives is preparing deductions of GOP lawmakers' pay if they refuse to wear masks.

Legislation to fine lawmakers who refuse to wear masks 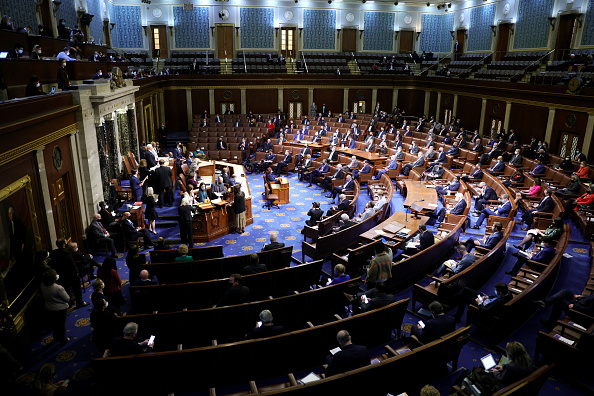 Legislators will face fines proposed by the House of Democrats for those who will refuse to wear masks after three House members who talked with maskless fellow lawmakers tested positive for COVID-19 during last week's Capitol riots.

The NY Post reported that a senior House Democratic aide confirmed the fines to take effect on Tuesday night as part of legislation urging Vice President Mike Pence to remove Trump through the 25th Amendment.

A source revealed that the resolution rule would include language implementing fine system for non-compliance with the mask requirement on the House floor.

For the first offense, the fine will be $500 and $2,500 for the second offense. GOP lawmakers' pay deduction will come from Member pay.

Representatives Pramila Jayapal (D-Wash.) and Bonnie Watson Coleman (D-NJ) tested positive for COVID-19 after they took shelter from a mob of Trump supporters in the U.S. Capitol. Allegedly, in the close quarters, some Republicans refused to wear masks.

On Tuesday, the House installed metal detectors through the area where lawmakers will have to pass, as legislative business resumes. Some Republicans said they would want to carry guns in Congress, as per N.Y. Post.

Three lawmakers possibly got COVID-19 in the protective isolation

House Speaker Nancy Pelosi urged the wearing of masks on the floor, but some House Republicans occasionally disregarded this rule, as per CNN.

On Monday, Coleman tweeted, saying that the Wednesday events, including sheltering with several colleagues who refused to wear masks, made her decide to take a test, which later revealed a positive result.

The congresswoman believes she was exposed during the Capitol building's protective isolation, which resulted from insurrectionist riots, a statement from Coleman's office said.

Early Tuesday morning, Jayapal tweeted that she also tested positive for coronavirus after being "locked down in a secured room at the Capitol where some Republicans refused to wear masks and mocked colleagues and staff for offering them one."

Previously, CNN reported six Republicans were caught on video while refusing masks offered by their colleagues during the Capitol insurrection. Coleman was in the same room in the secure location with the six Republicans who refused to wear masks. An aide told CNN.

On Tuesday, Democratic representatives Anthony Brown and Debbie Dingell proposed a bill that imposes a $1,000 fine on any GOP lawmakers who will decline wearing masks on Capitol grounds.

Capitol staff and lawmakers received a memo on Sunday from the attending physician warning them of possible COVID-19 exposure after lawmakers were forced to gather near each other during the Capitol breach.

Dr. Brian P. Monahan, the Capitol attending physician, instructed lawmakers and staff to monitor potential COVID-19 symptoms and be tested for the virus as a precaution.