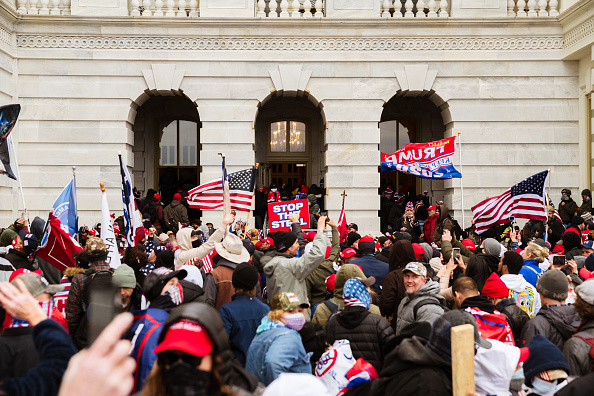 (Photo : Jon Cherry/Getty Images)
Trump Supporters Hold "Stop The Steal" Rally In DC Amid Ratification Of Presidential Election WASHINGTON, DC - JANUARY 06: A pro-Trump mob floods into the Capitol Building after breaking into it on January 6, 2021 in Washington, DC. A pro-Trump mob stormed the Capitol, breaking windows and clashing with police officers. Trump supporters gathered in the nation's capital today to protest the ratification of President-elect Joe Biden's Electoral College victory over President Trump in the 2020 election.

The U.S. airlines and law enforcement agencies tighten security at Washington DC airports as Trump supporters return home after invading the Capitol Wednesday. A top lawmaker urged officials to ban anyone who has joined the riot from flying, Daily Mail reported.

Amid the outrage at the mob of MAGA protesters, the beefed-up security comes at Dulles International and Reagan National airports. Passengers could expect to see increased security enforcement presence when they travel through the airports, a Metropolitan Washington Airports Authority spokesperson said.

American Airlines, Delta Airlines, and United Airlines said they are working with law enforcement agencies in keeping the safety of their passengers and would continue the enforcement of mask policies on flights. Staffing has also increased at the United and American airports.

Besides, their crew has moved away from downtown DC hotels earlier this week. Meanwhile, Southwest Airlines says it expects customers to adhere to the applicable law, crew member instructions, and federal regulations while traveling.

Bennie Thompson, Democratic chairman of the House Homeland Security Committee suggested that rioters who will be identified having entered the Capitol building be banned from future flights.

In a statement, Thompson said they already saw reports of "unruly mobs" on the way to Washington DC. "It does not take much imagination to envision how they might act their way out of DC if allowed to fly unfettered," he added.

The Association of Flight Attendants-CWA (AFA) International calls for strict penalties for passengers, in a news release, who was involved in the assault and other disruptive behavior on airports, The Washington Post reported. The AFA represents almost 50,000 flight attendants in more than 17 airlines, including United airlines.

The Democratic chairman urged the Federal Bureau of Investigation and the Transportation Security Administration (TSA) to add rioters to the federal no-fly list. The Terrorist Screening Center manages the 'no-fly' list which includes names of people who are restricted to board commercial aircraft for travel into, within, or out of the United States.

Following the September 2001 terrorist attacks on Washington, Dc, Pennsylvania, and New York, the list was created. However, civil libertarians criticized the list saying that the added names were made without due process.

In October 2019, the massive secret criteria that the government uses for adding suspected terrorists upheld by the federal appellate court after four people filed suit. The federal; government hides the number of people on the list, but it was discovered in 2014 that at least 47,000 names were listed in it.

On Wednesday, the president of the Association of Flight Attendants-CWA (AFA), Sara Nelson, who represents workers at 17 airlines, said, "Acts against our government, our democracy, and the freedom we claim as Americans must disqualify these people from the freedom of flight."

American Airline announced Thursday that it will no longer serve alcohol from the nation's capital after flight attendants "were forced to have talks with passengers exhibiting politically motivated aggression to other crew and passengers.

According to CNN the airline's statement said that they are working with airport authority partners and local law enforcement in ensuring the safety of the travelers and crew on the ground and in the air.