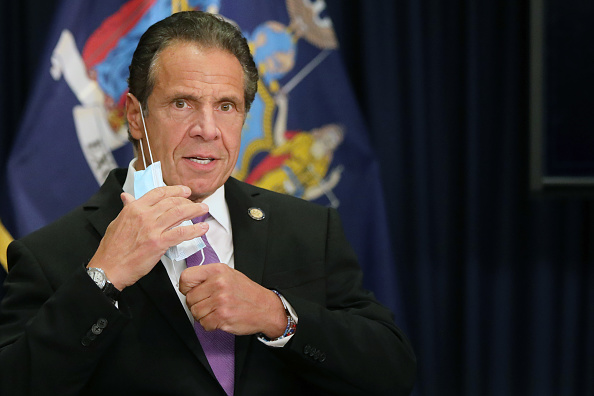 (Photo : Spencer Platt/Getty Images)
New York Governor Cuomo Holds A Press Briefing In NYC NEW YORK, NEW YORK - SEPTEMBER 08: New York state Gov. Andrew Cuomo speaks at a news conference on September 08, 2020 in New York City. Cuomo, though easing restrictions on casinos and malls throughout the state, has declined to do so for indoor dining in restaurants in New York City despite pressure from business owners, citing struggles by the city to enforce the state's previous orders.

In his State of the State speech, NY Governor Cuomo mentioned Monday that Congress should raise federal taxes on wealthy people. He also contended the hike in New York's income tax of high earners could fall short of closing the state's budget gap.

Cuomo says there is no indication that he would cut spending before the next budget in April, even if the state faces what he estimated to be a $15 billion deficit. According to the Niagara Gazette, Cuomo had a chance to showcase his policy initiatives in the first installment of four speeches before revealing a more detailed blueprint of fiscal plans in a proposed executive budget later this month.

Read also: New York: ICU Nurse Among Firsts in the US to Receive Vaccine

Previously, some of the New York Governor's goals were offered, including high-speed broadband access expansion, recreational marijuana legalization, and renewable energy development. Cuomo says the state will set up public health corporations in conjunction with Cornell University in Ithaca and Northwell Health on Long Island to help the COVID-19 vaccination effort.

The proposal came during the pressure from several county administrators with significant responsibility to offer arguments and inoculations that delays in the state plagued the COVID-19 vaccine rollout. To have a greater efficiency to the health care system and expand access, NY Governor Cuomo outlined a push for reliance on telehealth.

Many lawmakers claim that the effect of the COVID-19 pandemic, such as moving schools to online instruction, highlighted the need for the state to build more buildout internet connectivity. Meanwhile, Senator Dan Stec, R-Queensbury, said the focus on telehealth services expansions shows New York's need to end broadband accessibility delays in all regions.

Assemblyman Billy Jones, D-Plattsburgh, expressed his support in improving telehealth services. However, he said that lawmakers must first focus on broadband access expansion for families in the rural communities to reassure these services will be available in every New Yorker.

In a part of his annual address to the state that started Monday, NY Governor Cuomo says that the state will vaccinate millions of residents. According to the John Hopkins University School of Medicine data, the state's death toll is now nearly 40,000 people. At the same time, it tries to balance the reopening of the economy during the pandemic. Over the past 30 days, the state's hospitals and nursing homes recorded almost 4,1000 new COVID-19 deaths and saw more COVID-19 cases per-capita than the other 35 states, AL reported.

On Friday, New York Governor Andrew Cuomo back pleaded his policy, after the deBlasio complained thousands of doses would be unused, and some will be tossed out when expired. The governor warned that New York remains 47 weeks away from herd immunity unless the federal government increases the state's supply.

Cuomo recently announced a statewide order expanding the eligibility for the COVID-19 vaccines to seniors over 75 years of age, teachers, police, and transit workers, with mass vaccination areas planned at doctors' offices, pharmacies, and at the Javits Center in Manhattan.