Another 787,00 Americans File for Unemployment Aid as Weekly Benefit from COVID-19 Relief Bill Kicks In

Another 787,000 Americans filed for unemployment benefits as the pandemic continues to spread across the U.S. and world.

On Thursday, the Labor Department reported nearly 800,000 Americans filed for aid, which was adjusted for seasonal changes. From the prior week, it was a slight decrease in claims and fewer than what the economists expected.

Chief economist at PNC Gus Faucher said that unemployment benefits could be volatile around the holidays, so it might be a few weeks before it becomes clear.

U.S. unemployment crisis is not over 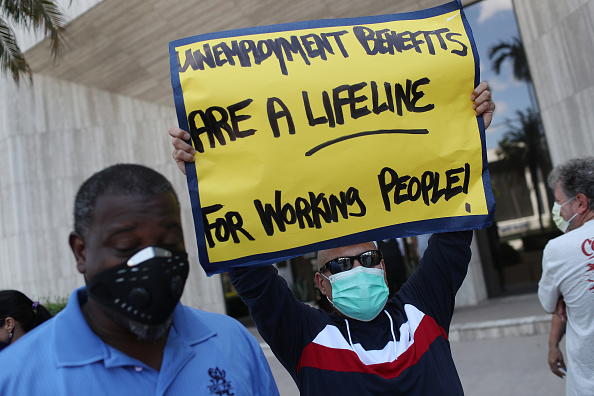 (Photo : Joe Raedle/Getty Images)
Workers Caravan In Florida Calls On US Senate To Extend Unemployment Benefits MIAMI SPRINGS, FLORIDA - JULY 16: Carlos Ponce joins other demonstrators participating in a protest asking Senators to support the continuation of unemployment benefits on July 16, 2020 in Miami Springs, Florida. The protesters were asking Senators to support the new Schumer/Wyden legislation that extends unemployment benefits for all laid-off Americans as the coronavirus pandemic continues to disrupt the economy.

According to CNN, the unemployment claims were nearly four times higher in the same period a year ago. Under the Pandemic Unemployment Assistance (PUA) program, the regular first-time claims were 161,460 workers, without seasonal adjustment.

The program was made to heal those who are not qualified for regular state aid, including those self-employed. The PUA program was included in last spring's CAREs Act, slated to expire in late 2020. But the new $900 billion stimulus bill signed into law extends the program by eleven weeks.

There may be a delay in receiving the unemployment benefits, while workers can file claims, receiving payments under the extension. The aid typically takes a few weeks to reprogram their computers, but some states move quickly.

Nancy Vanden Houten, Lead US Economist at Oxford Economics, said, "While prospects for the economy later in 2021 are upbeat, the economy and labor market will have to navigate some difficult terrain between now and then, and we expect claims to remain elevated."

The unemployment aid was extended

Nearly half of all states in the U.S. began the federal benefit distribution, as per an unofficial tally at UnemploymentPUA.com. Some states that take longer paying out the $300 unemployment aid can be made retroactively for the missed payments.

The congressional legislation expanded the federal benefits to 24 weeks, making the program to last until mid-March. Simultaneously, the new program that gives unemployment aid for gig and contractor workers, who are not eligible for the previous assistance, was extended for eleven weeks. On December 26, the benefits temporarily expired and cut off all aid for ten million unemployed Americans.