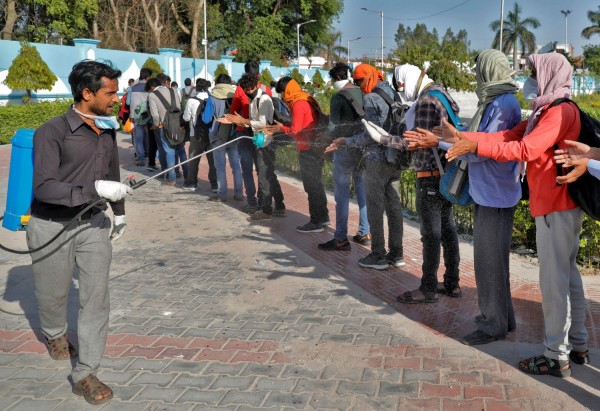 (Photo : REUTERS/Pawan Kumar)
A municipal worker sprays disinfectant on migrant workers before they board a bus to return to their villages, during a 21-day nationwide lockdown to slow the spread of coronavirus disease (COVID-19), in Lucknow, India, March 30, 2020.

The same bleach used to sanitize buses was used to the controversial drenching of migrant workers in the Indian state of Uttar Pradesh who returned home during a nationwide coronavirus lockdown.

While a group of Indian workers sat on the ground in the northern city of Bareilly, they were directly sprayed by the liquid that three people dressed in protective gear tried to soak them with.

A senior officer in charge of COVID-19 operations in Uttar Pradesh, Ashok Gautam shared that at least 5,000 people have been "publicly sprayed" upon arrival for them to be allowed for dispersal.

He also added that spraying them is a part of the disinfection drive, for the local government doesn't want them to be carriers of the virus and the disinfectant used was a solution made from bleaching powder which is not harmful to the human body, it could be hanging on their clothes that is why we have also sealed all borders so this would not happen again.

According to the World Health Organization (WHO), chemical disinfectants work on surfaces but they can be dangerous to people and even if it will be placed on your skin, it will not kill the virus if it is already in your body.

The "public spraying" shocked many in India including a senior official at the Ministry of Health and Family Welfare, Lav Agarwal who stated that the local officials involved in the incident have been reprimanded for the addition of spraying migrant workers for it is not part of a required policy in the country.

Agarwal emphasized that this is an overzealous action done by some employees at the field level, either out of ignorance or fear.

Nitish Kumar, Bareilly district magistrate tweeted that while the municipal corporation and local fire service were under orders to sanitize buses, they were overzealous in spraying the migrant workers directly.

He also shared that orders to launch an inquiry against those responsible have been given.

Being the highest-ranking district official in the city, Kumar mentioned that workers affected by the incident are currently under medical surveillance after the chief medical officer instructed them.

Losing their jobs as businesses shut their doors in entire Indian cities due to the lockdown, tens of thousands of India's migrant workers have been making long journeys back to their respective rural villages.

Prime Minister Narendra Modi urged all states on Sunday to seal their borders to stop the spreading of the virus, especially to the rural areas.

With a lot of migrant workers dispersed across the country, officials are scrambling to trace millions of migrant workers who returned to their villages and small towns across India for they need to enforce them the 14-day quarantine period.

India with a population of roughly 1.3 billion now has a number of 1,251 infected cases of COVID-19 as of Tuesday and tallied 32 deaths, while the battle against coronavirus continues in the country, 102 of the infected persons already recovered from the COVID-19.

Is a Reverse Mortgage for Me: An Overview of the Benefits and Drawbacks