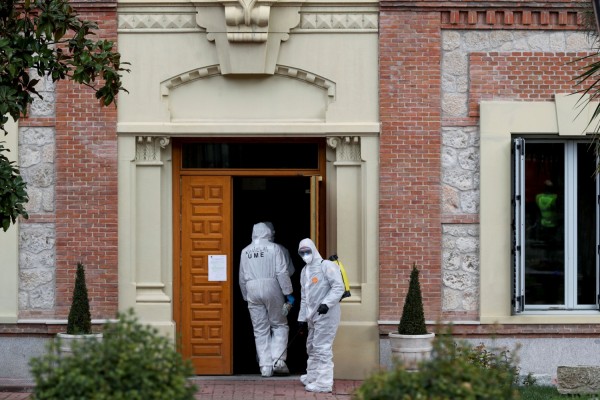 Amid the fight against the coronavirus pandemic, Spanish soldiers found retirement homes in the country deserted with their elderly patients abandoned and some of them lying on their beds dead, as reported by Spain's Defence Ministry.

Defense Minister Margarita Robles said that these elderly patients were left in the shelter to fend for themselves. The exact location of the home and the number of dead people were not yet revealed.

Spanish prosecutors have already launched an investigation regarding the abandoned homes which were discovered by military personnel who were brought in to help disinfect the said care homes.

This report comes a week after elders die or get infected with coronavirus in Madrid facilities. Paula Palmera, one of the elder's daughter told Los Angeles Times that "they are letting them die." This sparks investigation of all facilities in the area to make sure that old people in shelters are in good condition.

Spain is one of the countries to be on the receiving end of the outbreak's hardest hit in Europe, second to Italy.

On Tuesday, the country's health ministry has announced that the country's death toll has risen by 514 in only 24 hours, setting a daily record for the country. Based on the latest data, there are already 2,696 fatalities due to coronavirus in the country out of their 39,637 confirmed cases.

Margarita Robles, Spain's Defence Minister said that the government is going to impose stricter and more flexible ways of dealing with the way older people are treated in retirement homes, especially after the incident.

She noted that on certain visits, the army was able to find disturbing scenes where the elderly are completely abandoned and some have even died in their beds. Also adding that the staff of said nursing homes left the elderly to themselves amid the coronavirus crisis.

In a news conference, Salvador Illa, Spain's Health Minister said that they will exercise the most intensive monitoring of the COVID-19 cases in retirement homes since they house older people who are in the highest-risk of contracting the disease.

How bodies of COVID-19 victims are handled

According to health officials, under normal situations, the bodies of deceased residents of the said homes are put in cold storage and waits for funeral services to collect the remains.

However, due to the rise of coronavirus cases, those whose deaths are suspected to be linked to the pandemic were left in their beds until properly equipped funeral staff came to collect the bodies. This process could take up to 24 hours, especially in Spain's capital Madrid that has the largest number of cases and deaths.

As the COVID-19 crisis worsens in Madrid, the city's municipal funeral home already announced that due to the scarcity of personal protective equipment they would stop the collection of COVID-19 victims' bodies on Tuesday.

As the country's death toll and confirmed cases continue to spike, the country's government has sought to extend its state of emergency until April 11 in efforts to control the widespread of the disease.

Spanish Prime Minister Pedro Sanchez has stated on a news briefing that the country is currently at war against the virus as he called on Europe to launch a coordinated investment program similar to the post World War II Marshall plans.

The country's state of emergency was initially decreed on March 14 and was only intended to last for 15 days and has banned people from going out aside from essential outings.