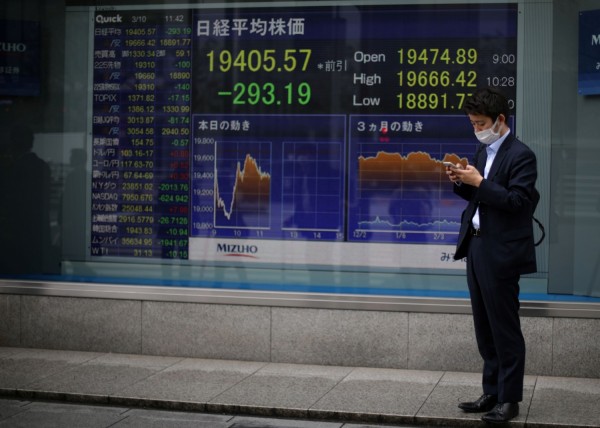 (Photo : REUTERS/Stoyan Nenov)
A man wearing protective face mask, following an outbreak of the coronavirus disease (COVID-19), stands in front of a stock quotation board outside a brokerage in Tokyo, Japan, March 10, 2020.

Dubbed as the "Black Monday," the economy witnessed the worst day since the financial crisis has faced dramatic falls in shares world wide.

With the market already tanking as an effect of the growing coronavirus outbreak, major financial indexes in the Us and in Europe dropped by more than 7% and 8% respectively.

A similar scenario was also witnessed in Asia and in Europe as the oil-feud between Russia and Saudi Arabia caused prices in oil to plummet.

Economic analysts have described the reaction of the market amid the impact of the looming coronavirus as an 'utter carnage'.

The Dow Jones Industrial Average experienced its largest decline in terms of percentage since the financial crisis and experienced the biggest points-drop in history, sinking by 7.8% or more than 2,000 points. Nasdaq also dropped by 7.3% while S&P 500 plunged down by 7.6%.

The continued feud between Saudi Arabia and Russia over oil production also triggered the drops in the market. Saudi Arabia has warned that they would be pumping more oil and will be slashing prices after Russia turned down a proposal by oil exporters to slash their supply to avoid an oversupply of crude due to low demand brought about by coronavirus pandemic which has affected travels.

Experts described Saudi Arabia's decision, as the country flexing its muscles in order to retain its position in the oil market.

Read also: Things to Look Out for in the Coming Weeks in the Financial Markets

The price of international oil standard Brent, fell almost one-third on Monday. The drop was considered the biggest since the Gulf War in 1991 but recovered quickly to a lower yet still worrisome decline of 20%.

As the coronavirus continues to spread worldwide, the demand for fuel is expected to decline due to travel restrictions placed in view of the pandemic.

In the US and UK, oil companies are on top of the market declines as shares in Shell, Chevron and BP dropped to at least 15%. While Premiere Oil saw its shares halved in value.

Experts around the world continue to worry about what the effect of the coronavirus would be in the global market in the long run. However, despite the drops in most stocks, there are few stocks that rose in value as the effect of the virus. Stocks of Biotech firms and Pharmaceuticals that developed vaccines and treatment for COVID-19 shot up last week.