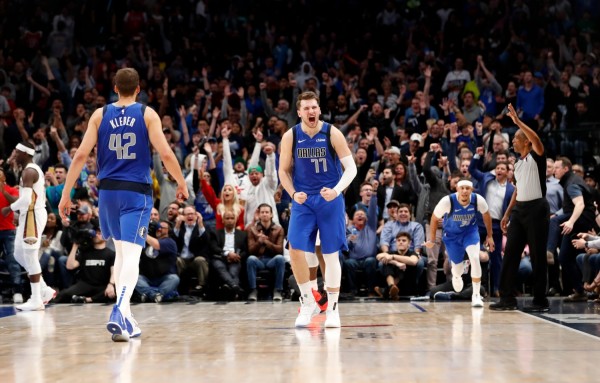 The Dallas' Euro Connection continued to shine as they escaped the Zion Williamson-led Pelicans in an overtime thriller with a W as Luka Doncic grabbed the most triple-doubles in Mavericks' franchise history, 127-123.

The "Unicorn" Kristaps Porzingis dropped a double-double performance scoring 34 points and grabbing 12 rebounds backing up Luka Doncic as he records his 22nd triple double performance with only 122 games played as he tallied 30 points, 17 rebounds, and 10 assists to set the franchise record and to seal the deal at home.

Even finishing the night with 21 points, 6 rebounds, and 3 assists Zion Williamson found himself contained most of the time by Maxi Kleber, as the Dallas' center sacrificed his body playing straight up defense denying Zion in the rim and boxing him out to limit the young Pelican while recording five points, seven rebounds, four assists, a steal and five blocks.

Despite the hot start from Lonzo Ball, Dallas' managed to take the lead early in the game as Luka firing beyond the arc and displayed a good ball movement leaving Seth Curry to drill a triple ending the first quarter in their favor, 24-22.

Lonzo continued to fire triples in the second frame with Brandon Ingram showcasing his offensive versatility taking the ball outside and finishes at the rim but the Mavericks answered those courtesy of NBA's second generation players Tim Hardaway Jr.and Seth Curry who fires at the three point territory giving the Dallas a two point lead in the first half, 57-55.

Down by only two in the first half, the Pelicans stayed in striking distance with Brandon Ingram dropping his pull up jumpers. Meanwhile, Lonzo is nailing his 6th triple to tie the game at 69 and coming from a missed lay up of Porzingis, Lonzo grabbed the rebound finding Zion Williamson for a monster jam coming from a spin move. But the "Unicorn" answers back with a three of his own and Luka continues to fire triples to stay on the lead at the end of third, 87-85.

Bench from both teams gave quality minutes for both teams as they managed to keep the game close. But with the clock down by 2:31 remaining Brandon Ingram hit a long bomb coming from Derrick Favor' screen to answer Luka's triple and to take the lead as they battle for the upper hand spot of the game. However, down by a point, Luka drove to the basket and kicked-out the ball to Seth Curry drilling the corner three increasing their lead by two points but after a missed three from the Pelicans, Dallas grabbed the rebound and passed the ball to Seth. The Pelicans fouled him for a time stoppage and a trip to the line but Seth missed his first free throw making only one as he pushed the lead to just three points and with 9.9 remaining in the clock coming from an inbound pass Lonzo finds the open NIcollo melli who drained the game tying triple sending the game to overtime,112-112.

But during the overtime, Luka took over as he nailed a triple over Derick Favors to take the lead and dished a pocket pass to a trailing Porzingis who dropped the bomb giving Dallas the 4 point lead as the game ended, 127-123.

Brandon Ingram finished the night with 27 points, 5 rebounds, 4 assists, a steal and a block alongside Lonzo Ball who managed to tie his career-high seven triples made making 25 points, 11 rebounds, 6 assists but it is still not enough as they fell short into the hands of the Mavericks.