Islam Prayer Leader Stabbed Amid Worship in a London Mosque 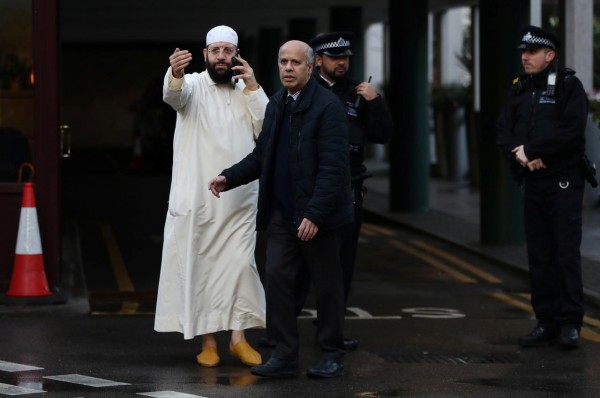 A man under suspicion of attempted murder after stabbing a worship leader on the shoulder at the London Central Mosque in Regents Park, London has been arrested by the police.

According to London's Metropolitan Police's statement, officers were called to the mosque just where they found a man in his 70's who has injuries after being stepped. They further added that the victim has been taken to a hospital and that the injuries he sustained were not life-threatening. They also said that the incident is not to be considered terror-related.

Per CNN, eyewitnesses told them that there were at least 100 people in the mosque when the attack happened and several people helped pin the assailant to the ground. In addition, some of the witnesses also claimed seeing the man attend in the mosque in recent weeks.

On a video posted by Independent, the man was seen in a red hooded jacket being pinned down by a police officer and then escorted out of the mosque.

In the police statement, it was stated that the suspect is currently being held in custody at a central London police station and that they already have set up a crime scene.

Borris Johnson, Prime Minister of the United Kingdom said that the incident deeply saddened him, especially knowing that this happened inside a place of worship. He further added that his thoughts are with the victim and with everyone who has been affected by the unfortunate incident.

Meanwhile, London Mayor Sadiq Khan reassured London's communities that acts of violence like this will not be tolerated in the city and that Londoners are entitled to feel safe in their place of worship. He also said that police are providing additional resources to the area.

Although the man has been seen inside the mosque prior to the stabbing incident and was believed to have prayed inside the building before, advisor Azay Ahmad said that the guy was not a regular and he haven't seen him in the past 10 years except for the few visits recently.

The stabbing incident happened just a day after news of a gunman opening fire at two shisha bars in Hanau, Germany, killing at least 9 people broke. According to Angela Merkel, the suspect in the shooting incident showed signs of racism.

In view of this, Lord Nazir Ahmed, the first-ever Muslim life peer to be appointed to the chamber has asked people to take precautions and make sure that there is security in every Mosque during the time of prayers.

Furthermore, the CEO of the Ramadhan Foundation, Mohammed Shafiq paid tribute to the local Muslims and police officers who made sure that the situation was under control and prevented it from escalating into more violence.

He also added that even with the full facts, the result of the investigation is not yet released. Shafiq stressed that it is clear that Islamophobia is indeed real, posing a threat to cohesive communities, and that even in their place of worship they still aren't fully secure.