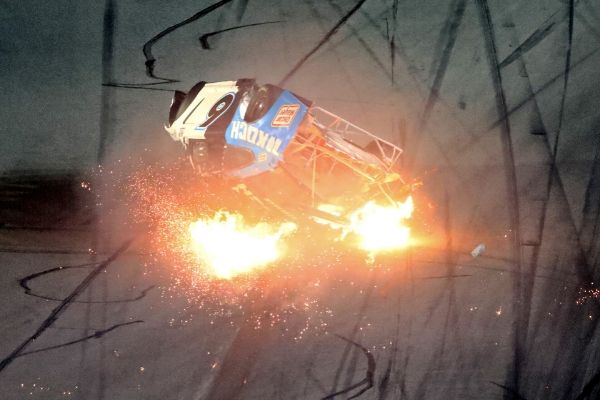 Ryan Newman, a Daytona 500 driver, nearly lost his life in a race track accident. The crash caused his car to spin and flip, and go up into the air before landing in a heap on the track.

After the accident, he was treated at the Halifax Medical Center, which was announced in a tweet by Roush Fenway Racing. Though revealed to be in a serious condition, doctors said that the driver will survive but with serious injuries that will heal eventually.

The accident is considered as one of the worst car crashes in NASCAR history that was very fatal. But fortunately, the driver, Ryan Newman got out of it alive. He is awake and talking with family and doctors who took care of him. Just a day after he was retrieved from his race car's broken heap, he is now talking and relieved.

Surviving that kind of accident is not possible without the upgrade safety by NASCAR for all cars. It was the death of Dale Earnhardt in an accident that prompted changes in safety standards to prevent fatalities on the track from happening again.

It was alreayd in the final lap of the Daytona 500 when Newman nearly lost his life. Both Newman and Denny Hamlin were racing to the finish at the lead. But Ryan Blaney pushed Newman and nudged Newman's car to the lead which then locked bumpers that sent the car slamming into the wall and flying.

It got worse when the car fell on the track, Corey LaJoie hit the driver's side to flip it over to its roof. The batter chassis slid on the track with flames.

Freeing the driver from the car took safety specialists a few minutes to do it. He was immediately rushed to the hospital. After the accident, his team said that Ryan Newman is in serious condition but his injuries were not fatal to the driver. So, far anything about his injuries is not yet made public.

Roush Fenway Racing made an official tweet that despite injuries, he was conversant and awake since Monday night.

Ryan Newman, at 42 years old, is having his 19th season at the NASCAR Cup. His victories include 2008 winner of the Daytona 500, with 18 Cup Series wins that made up his professional career.

After Thursday's Twin Duel Races, wherein he finished the third in the Koch Industries Ford which he drove to victory, he said, "the big one is on Sunday."

However, on Sunday, the race was postponed because of bad weather and moved to Monday when the accident occurred.

Right after the Thursday win on the track, he commented that everyone at Ford had a strong finish. Four of the top four cars were theirs, and it was a good prospect at the 500.

After learning of the good condition of Newman, Mark Rushbrook of the Ford Performance Motorsports said that the team was glad of the driver's stabilized condition.

Rushbrook commented that Ryan is an important part of the team and everything connected with the racing team. He is respected and considered a great driver in the sport by everyone.

Denny Hamlin was the winner on Monday, with a third career win at NASCAR, also the first race of the Cup season.

Despite losing the race, Ryan Newman still has Daytona 500 victories in him with more to come when he fully recovers.