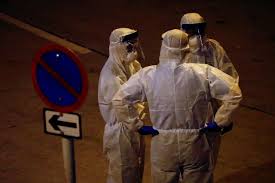 An apartment block in Hong Kong was partially evacuated by health officials early in the morning with fears over possible CODIV-19 transmission through the building's pipes, Tuesday.

As per CNN, health officials said that two residents living on different floors of the high-rise apartment tower Hong Mei House, in Tsing Yi, Northwest Hong Kong has been infected by the corona virus.

The first reported infection was on a 75-year-old man. A week-and- a-half after, another resident who is a 62-year-old woman was also infected. After which, three more cases were linked back to the building and these are the old woman's son, his wife and her father. The son and his wife reportedly shared the apartment with the woman.

These cases has set the alarms of the virus spreading with health officials taking into account whether the virus could have been spread through the building's pipelines. If so, this could lead into an outbreak where hundreds of people can be infected in their own homes, wherein they thought they were safest.

The two initial cases in the apartment building lived on the same vertical block, number seven although they are ten floors apart. Thus, health authorities evacuated the whole vertical block number 7 of the 30-floor building since the pipes were their toilets discharge are linked.

It can be recalled that in 2003, transmission through pipelines was a major source of Severe Acute Respiratory Syndrome (SARS) during its outbreak.More than 300 infections, and 42 deaths were then recorded after defective plumbing allowed the virus to spread at the Amoy Gardens Estate.

Also read: Over 7,000 Tourists Quarantined in Japan and HongKong Cruise Liners for Coronavirus

After the investigations were launched last Tuesday, the officials are quick to defend the building's sewage system. However, in a press conference, Hong Kong housing minister Frank Chan stated that the initial investigation led to the bathroom pipe of the second patient revealing that it could have been altered.

However, the fact that two patients lived above one another and that initial inspection revealed a disconnected pipe from the bathroom's waste pipe, health authorities investigated whether the virus spread through the sewage system.

According to Infectious Diseases Division chief at Hong Kong university Ivan Hung, studies made in the early stages of the novel corona virus has suggested that it could spread through feacal matter, however, there is no concrete evidence of this yet.

While Microbiologist Yuen Kwok-yung said at a press conference last Tuesday that virus transmission could have resulted from an improperly sealed pipe that carried infected feces into the building's ventilation system. Authorities are still investigating a modified vent pipe in Hong Mei House which could have been the cause of the virus transmission to the residents,

Moreover, Hong Kong's Center for Health Protection has advised the public to regularly pour water into their drain outlets to maintain their drainage pipe while the investigation in the building is still on going.

With this said, if the investigations saying that the virus can travel through pipes is confirmed, even staying at inside their homes where people feel most safe may be the same place that put them at risk.