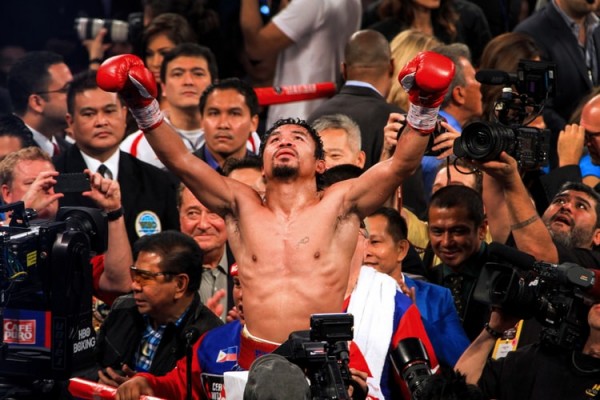 (Photo : Unsplash/Macau Photo Agency)
Floyd Mayweather has not ruled out further negotiation with Manny Pacquiao over a potential money-spinning encounter. Claims that Pacquiao was no longer in the running have now been denied by advisor Sean Gibbons.

Floyd Mayweather has not ruled out further negotiation with Manny Pacquiao over a potential money-spinning encounter. Claims that Pacquiao was no longer in the running have now been denied by advisor Sean Gibbons.

According to data, the majority of boxing fans are still hanging on to hope that 2020 will be the year this topic gets put to rest one way or another.

Since their bout last May 2, 2015 at the MGM Grand Garden Arena in Las Vegas, won by Mayweather via a unanimous decision, the two fighters have been connected. The hopes have been alive for five years now, the same amount of time it took for the first fight to finally get made.

Now, Pacquiao has divulged that he is in talks with Mayweather over a multi-million-pound rematch. Since the "Fight of the Century," the mooting of a rematch has gained a significant pace in recent months.

However, the reigning WBA super welterweight champion from the Philippines complained that money was giving promoters and governments a hard time with so many demands.

He said that Pacquiao-Mayweather 2 could take place - possibly in 2020 - but stressed they were only "preliminary discussions" and were far away from signing a formal agreement.

Mayweather has been currently planning to have 2 fights in 2020, with a rematch against Manny Pacquiao and another crossover bout against a UFC opponent.

He "feels the time is right" for a second clash with Pacman after their heavily promoted first encounter fell flat in 2015.

Pacquiao has stirred talk of a second clash following having won three fights in a row. After the Filipino Senator defeated Keith Thurman on July 20 at the MGM Grand Garden Arena in Las Vegas, the chatter of a rematch picked up instantly.

Right after the Thurman fight, Pacquiao tweeted that he is challenging Mayweather to a second fight, with this post generating 88,508 responses and 67,690 Reactions.

Mayweather, 42 and now retired, and Pacquiao, still going strong as he reigns as the WBA welterweight champion, had a lucrative but dull bout in 2015 that soured many boxing fans. A rumor culminated in a massive bid from Saudi Arabia to stage the contest.

Mayweather has retired since defeating Conor McGregor by TKO in 2017 with his real final boxing match against Andre Berto having taken place in 2015. Meanwhile, Pacquiao is still on a roll in his boxing career, having defeated five quality opponents in Tim Bradley, Jessie Vargas, Lucas Matthysse, Adrien Broner and, Keith Thurman and a controversial defeat to Jeff Horn in 2017.

Mayweather was initially against the idea of rematching the reigning WBC (Super) welterweight champion but has recently done a 180.

Pacman said that change of heart has led to negotiations between their respective representatives.

Their 'Fight of the Century' was the richest boxing event in history with more than US$500 million generated, mainly from a record of 4.4 million pay-per-view sales.