Recently the Taliban insurgents hung the bodies of criminals on diggers that were another expression of Taliban cruelty on display after they booted out the US. The hung men were supposed to be criminals, according to the terror Jihadis, who were supposed to address more humane reforms in Afghanistan. 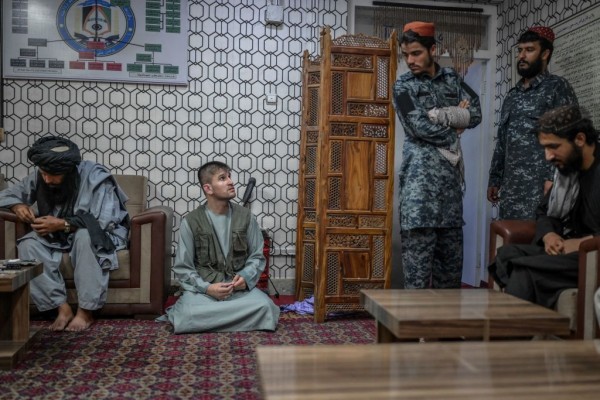 (Photo : Photo by BULENT KILIC/AFP via Getty Images)
A man (2L) accussed of robbery sits next to Taliban members while in custody at a police station in Kabul on September 30, 2021.

For many in the west, seeing the corpses hanging from the crane was a bit shocking. For the Talibs, it is applying laws to curtail such men in their communities.

But, the point western media makes is the lack of due process, which the Jihadis do not acknowledge.

Bodies of criminals displayed by the Taliban in Herat

The harsh punishment, said the deputy governor Mawlawi Shir Ahmad Muhajir, is that these three men were caught robbing a home, reported the Sun UK.

Images shared on social media show the dead men hanging in midair, connected to construction equipment. No one knows if they were killed before or after hanging in Obe District in Herat.

While the bodies were dangling by their necks, people took pictures of the grotesque scene, cited India Atoz.

Last Tuesday, this scene was one of the Jihadis punishments that violate human rights. The international communities worry the slip to such brutal practices weren't part of the Talibs promise. The last time such medieval barbarity was seen was from 1996 to 2001 in the Asian country.

For many, this is one sign that the terror jihadis, despite their campaign to prove they have changed, sincerity is somewhat questionable. Taliban insurgents hung the bodies of criminals on diggers, such terrible punishments like this to curtail the rights of citizens like women and girls are a step backward.

Taliban hung bodies of criminals around the city as a reminder

The Taliban gave the same punishment weeks before to alleged kidnappers, also hung by the neck until they died after the Talibs executed the doomed men.

According to eyewitnesses, the men were dragged into Herat Square. One was hung by the neck and placed on a crane; the other three dead men were brought all over the city to be hung as a gruesome reminder to the already terrified populace.

A pharmacist, Wazir Ahmad Seddiqi, owns near the square, said the dead men were kidnappers that the Talibs caught. They are supposed to be killed by the police, noted AP News. 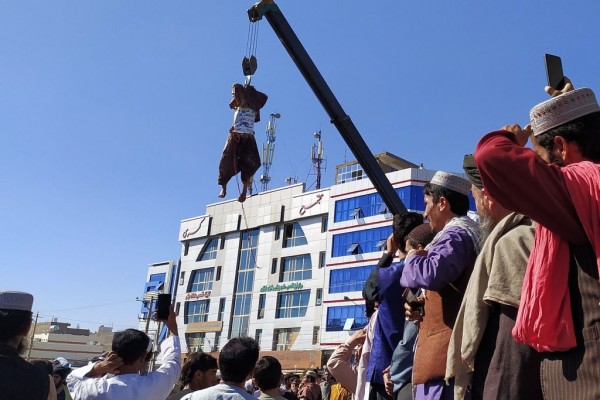 (Photo : Photo by -/AFP via Getty Images)
EDITORS NOTE: Graphic content / TOPSHOT - A dead body (top) displayed in a public area is hanging on a crane in Herat on September 25, 2021, after Taliban killed four kidnappers during a shootout and hanged them, a senior official said.

Recently the Afghan girl football squad was asking for help to avoid the Jihadi's harsh rule, and they offered to play for Leeds United.

The 32 players, their families, and their coaches have a month to stay in Pakistan before their visas run out. They will have no choice but to go back home.

They have written to UK PM Boris Johnson for visas and possibly part of a UK football team. The UK Home Secretary is trying to arrange such a transfer to Britain before the deadline.

One Charity, Football for Peace, co-founder Kashif Siddiqi mentioned it was now a race to get the team from going back to Afghanistan.

The team went overland to escape the Jihadis but were on a reprieve. But the Taliban called on Johnson to respect Kabul to rebuild.

Related Article: Disenchanted Taliban Defectors Switch to ISIS-K After Reforms by their Leaders in Kabul