The Columbus Blue Jackets continued to punish players who refused to take the COVID-19 vaccination before the season starts. 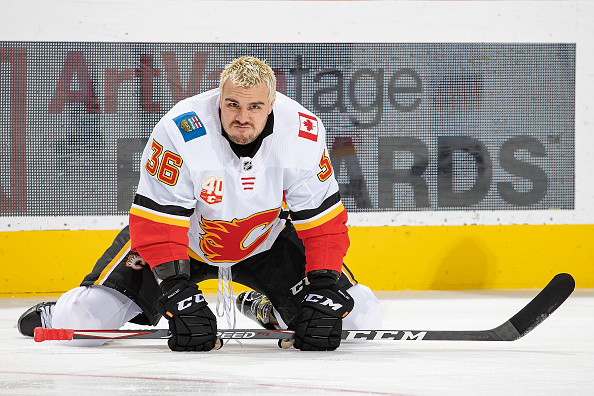 (Photo : Dave Reginek/NHLI via Getty Images)
Zac Rinaldo #36 of the Calgary Flames stretches in warm ups prior to an NHL game against the Detroit Red Wings at Little Caesars Arena.

In a recently published article in Newsweek, Columbus president John Davidson stated on Tuesday that veteran forward Zac Rinaldo would be refused entry to training camp and would begin the season in the American Hockey League because of his reluctance to be vaccinated.

During his media day availability, Davidson said that all 67 training-camp participants will completely be vaccinated against the virus, calling it "a significant problem" for the Blue Jackets. Davidson said that they both won as a team and they will also continue to fight COVID-19.

Rinaldo, who signed a two-way deal with Columbus in June, has made a name for himself as an enforcer who is notorious for delivering out dubious blows to opponents throughout the course of his hockey career. He's the second Blue Jackets employee to face repercussions after refusing to be vaccinated, according to a published report in The Seattle Times.

Columbus dismissed assistant coach Sylvain Lefebve this week for refusing to be vaccinated, despite the fact that he had just been appointed on June 30. The 31-year-old has also been an outspoken opponent of vaccination mandates, describing himself as "pro-choice" while publicly campaigning for Maxime Bernier, the founder of the People's Party of Canada, who lost his bid for a parliamentary seat on Monday.

Read Also: Los Angeles Star Mike Trout Unlikely To Return This Season, May Not Get Another MVP Award

In a published article in The Washington Newsday, the NHL has the toughest COVID-19 procedures for unvaccinated athletes of any North American team sport, requiring all club employees and workers to be properly vaccinated. If unvaccinated players acquire the virus and miss practices or games, they will be punished without pay and will be forced to quarantine upon entering Canada from the United States.

Last Monday, NHL deputy commissioner Bill Daly said that the league anticipates 98 percent of players to be completely vaccinated by October 12th, the season's opening night. He stated that when the season begins, just around 15 players would be unvaccinated.

The NHL Players Association is unlikely to object to the Blue Jackets' decision to punish Rinaldo for not being jabbed, according to Davidson, whose daughter Lindsay is a pediatric emergency care doctor. Davidson said, "I think when you read the number of players and the percentage of players that have been vaccinated, it's a big, big number," according to a published report in Daily Advent.

Team's General Manager Would Welcome Back Zac Rinaldo Once Vaccinated

If Rinaldo gets immunized, Columbus general manager Jarmo Kekalainen stated that the club will welcome him back. Davidson said they do everything as a team. That's a condition of becoming a Blue Jacket so they'll stick with the group that's fully vaccinated and watch how things go.

Meanwhile, Davidson explained that when everyone considers vaccination, the team, their supporters, the players, and their families, they have a duty as leaders of the organization to ensure that their people get vaccinated. They try to disguise themselves as much as possible. That's the way things are.

Related Article: NFL's Quarterback King Tom Brady Continues To Play at 44, Leads the Team To Win During the Season Opener