A 61-year-old Chinese American man was in serious but stable condition in a New York hospital on Sunday after being the victim of an Asian hate crime.

On Friday night, the man collected cans in East Harlem when he was assaulted from behind, thrown to the ground, and repeatedly kicked in the back. The attacker seemed to be stomping on the man's back, based on the surveillance footage obtained by police, USA Today reported. 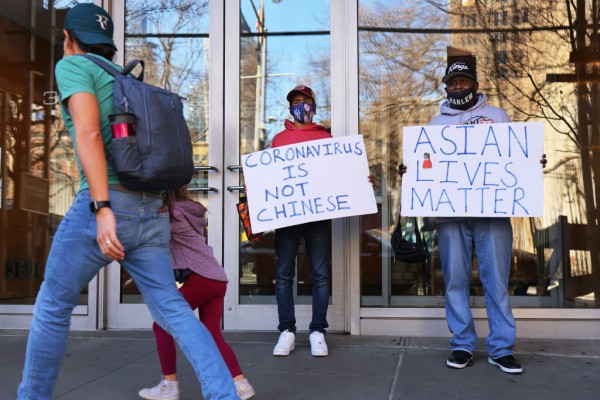 (Photo : Michael M. Santiago/Getty Images)
In Another Hate Crime, Asian American Woman Attacked In Midtown Manhattan NEW YORK, NEW YORK - MARCH 30: Cameron Hunt and his father Calvin Hunt stand outside the 360 W 43rd Street building with signs of support in Midtown Manhattan on March 30, 2021 in New York City. On Monday morning, an unidentified man attacked a 65-year old woman knocking her to the ground and stomping on her head several times and made anti-Asian remarks. NYPD are calling a targeted hate crime. The victim was hospitalized with serious injuries. Brodsky Organization, which manages the luxury apartment building, have suspended staff members who witnessed the attack but failed to intervene. The attack follows a series of targeted hate crimes against people of Asian descent and has been increasing since the start of the coronavirus (COVID-19) pandemic.

The most recent incident in an alarming surge of attacks against Asian people countrywide is thought to be sparked by misguided outrage over the coronavirus pandemic, which began in China. Police did not release the victim's name, but several news sources named him Yao Pan Ma, a former restaurant worker who lost his job due to the pandemic and attempted to make money by collecting cans.

In an interview with the New York Post, the victim's wife, Baozhen Chen, 57, pleaded with police to identify her husband's perpetrator. Chen said in Mandarin through a translator, "Please capture him as soon as possible and make him pay."

She said that her husband is still in a coma, and she is afraid that she will be the next victim. Her fears follow a similar assault on a 65-year-old Asian American woman in the city on March 29, which resulted in her hospitalization and hate crime allegations.

Last month, an Asian woman was attacked in an apparent hate crime

A 65-year-old Asian American woman was hospitalized with severe injury in late March after a man hit, kicked, and stomped on her in a Manhattan street while yelling anti-Asian slurs. The attack was reminiscent of an attack near Times Square last month in which a woman from the Philippines was the victim.

In that assault, a parolee convicted of killing his mother almost two decades earlier was apprehended. Similar events have been reported in other cities, especially in significant Asian communities, such as San Francisco and Oakland, California.

Stop AAPI Hate, which was created last year in reaction to the intensified targeting of Asian Americans and Pacific Islanders during the pandemic, announced in March that it had received accounts of nearly 3,800 Asian hate crimes in a year estimating that this was just a fraction of the actual figure.

Last week, the United States Senate passed legislation to combat the increase of hate crimes targeting members of the Asian American and Pacific Islander (AAPI) community. The bill will hasten the Justice Department's review of hate crimes and offer assistance to local law enforcement in the wake of thousands of recorded violent events in the previous year, SCMP reported.