Progressive Democratic senators have been calling on President Joe Biden to waive $50,000 in student loan debt in recent days. 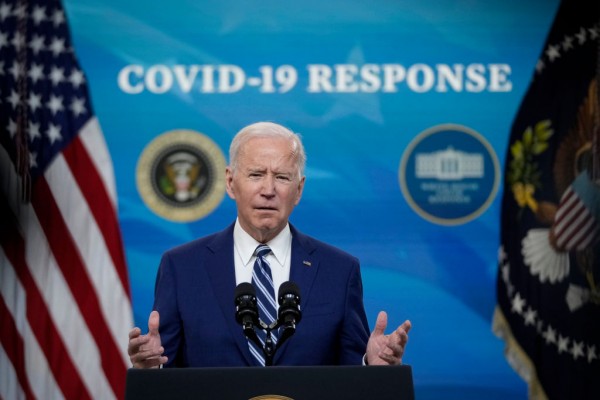 (Photo : Drew Angerer/Getty Images)
President Biden Delivers Remarks On COVID-19 Response And State Of Vaccinations WASHINGTON, DC - MARCH 29: U.S. President Joe Biden delivers remarks on the COVID-19 response and the state of vaccinations in the South Court Auditorium at the White House complex on March 29, 2021 in Washington, DC. President Biden announced Monday that 90% of Americans will have a vaccination site within five miles of their homes by April 19.

Senators Chuck Schumer of New York and Elizabeth Warren of Massachusetts, as well as several members of the Congressional Democratic Party, have pressed Biden to repay a large amount of student loan debt, which is projected to be worth more than $1.7 trillion. Despite Biden's public opposition to the idea, White House Chief of Staff Ron Klain told Politico on Thursday that the president has asked Secretary of Education Miguel Cardona to prepare a memo on whether the administration has the legal authority to waive up to $50,000 in student debt.

Regarding the pending memo, Klain said, "Hopefully we'll see it in the next few weeks. And then he'll look at the legal authority, the policy concerns around it, and then he'll make a call." Schumer and other progressive Democratic lawmakers used Twitter on Saturday to press the Biden administration to act, Newsweek via MSN reported. Student debt cancellation proponents contend that the government has the right to simply revoke student loan payments, noting that payments and interest have also been suspended due to the pandemic.

During a press conference last week, Massachusetts Democrat Representative Ayanna Pressley clarified that student debt is a problem that affects Americans of all generations. The congresswoman claimed that she frequently meets with people in their 50s and even their 70s who are also making student loan payments.

"We do a disservice to white graduate students who go to Ivy League institutions because we maintain the idea that the face of student debt is white graduate students," Pressley said. Although the president is now allegedly considering forgiving $50,000 in student loans, he previously voiced resistance to the idea. When asked about the possibility during a CNN town hall in mid-February, Biden immediately replied, "I will not let that happen."

Stimulus Bill To Exempt All Student Loan Forgiveness From Taxation

The Biden administration came into the office to ease the burden of student loan debt, particularly in light of the coronavirus pandemic's added financial burden. President Joe Biden signed an executive order on his first day in office restoring a moratorium on student federal loan fees imposed by the previous administration as part of COVID-19 relief. Liberal groups and lawmakers encouraged Trump to go even deeper to cancel student loan debt, but he has said categorically that he does not feel he has the right to do so by executive order.

Conservatives and some liberals reject student loan debt forgiveness, claiming that it would disproportionately favor higher-income earners with advanced degrees and that taxpayers must repay their debts regardless of the situation. Though Biden has been resistant to bypass Congress to cancel student loan debt, he has stated since the beginning of his campaign that the government must assist those who are burdened with "debilitating" student debt.

According to a study by US News and World Report, average tuition at private colleges has risen by 144% in the last 20 years, 165% at public universities for out-of-state students, and 212% at public universities for in-state students. Since correcting for inflation, average tuition and fees at public four-year schools have increased by more than $5,000 annually, while private colleges and universities have increased by more than $13,000 annually, according to figures obtained by the College Board.

Despite grant aid, the average first-time, full-time undergraduate at a public, four-year college has to spend $14,850 in tuition, fees, and boarding this academic year, College Board projected. After grant funding, the average student at a private school would pay $29,110. Additional expenditures such as books, supplies, and lodging are not included.

The Federal Reserve reports reveal Americans owe $1.7 trillion in student loans, as per USA Today. According to the Institute for College Access and Success, the average 2019 graduate of private or public colleges owes $28,950 in debt.