The $1.9 trillion COVID-19 bill is now legislation, signaling the start of the third round of stimulus checks. The IRS is now preparing to send out the first round of the latest fees. "Direct deposits could start turning up in people's bank accounts as early as this weekend," White House press secretary Jen Psaki said on Thursday.

More than one stimulus check in Biden's COVID-19 bill 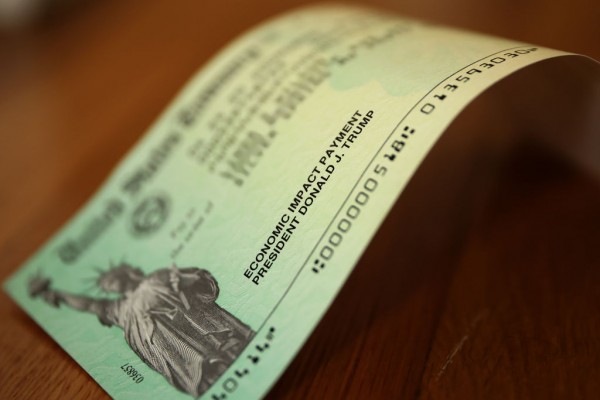 (Photo : Chip Somodevilla/Getty Images)
WASHINGTON, DC - APRIL 29: U.S. President Donald Trump's name appears on the coronavirus economic assistance checks that were sent to citizens across the country April 29, 2020 in Washington, DC. The initial 88 million payments totaling nearly $158 billion were sent by the Treasury Department last week as most of the country remains under stay-at-home orders due to the COVID-19 pandemic.

However, unlike the first and second checks, the $1,400 direct payment has even stricter wage caps, which changes the eligibility rules and excludes millions of higher earners. On the other hand, the next two payments include a continuation of monthly $300 federal payments to unemployed people through September and an extension of the child tax credit, which will give lower-income households periodic payments.

The proposed federal minimum wage increase was one direct payment scheme that did not make it into the enacted legislation; however, proponents pledge to reintroduce the wage hike later. The COVID-19 bill further increases support for the delivery of the COVID-19 vaccine.

This weekend, tens of millions of Americans will get the $1,400 stimulus check. Any citizen who applied for the first two payments may not qualify for the third due to revised eligibility requirements.

Adult dependents and children, and families with mixed citizenship are included in this third round of payments. Here's how the third payment holds up to the first two in 2020, as per CNET via MSN:

The new COVID-19 bill would ensure that the weekly $300 federal unemployment benefits, which were due to expire on March 14, are renewed without a funding void. The new bill increases the amount of the child tax credit, which now encourages families to collect up to $2,000 for children under 17.

The package makes the credit available to lower-income households who would otherwise be without it. Families will demand up to $3,600 a year for children under the age of 6 and $3,000 per year for children aged 6-17.

Unlike the first two, the third stimulus payment is not limited to children under 17. Eligible households will receive a payment depending on any of their eligible dependents listed on their tax return, including older people such as college students, disabled adults, parents, and grandparents.

Few people have reported having the incorrect bank account number on the IRS website while checking their payment status, and while this is concerning, it does not suggest the money has been lost.

If the deposit details are wrong or the account has been closed, the bank will refund the money to the IRS, then mail the funds by checking the address on file with the IRS. The IRS also states that you cannot change your bank records already on file with the IRS for your first or second Economic Impact Payment, and that "don't contact the IRS, the phone assisters won't be able to change your bank details, either," according to the website.

If your address is wrongly specified, the IRS advises that the only way to fix it is to file your 2020 tax return using your current address if you haven't already done so. The most efficient method is to register it online. If the invoice cannot be delivered for whatever reason, the IRS claims it will be returned to you, and you will have to have it reissued.

Set up a direct deposit with the "Get My Payment" tool to have the stimulus payment reissued. Your payment status will be changed to "Need More Information" until the payment is returned to the IRS. After that, you'll have the option of receiving a direct deposit to a bank account, a prepaid debit card, or another financial service with a routing and account number, Newsweek reported.

Third Stimulus Check: Why Do You Need to Track It?