Progressives pushed for continuous payments during the COVID-19 pandemic until Congress approved a third round of stimulus checks as part of the American Rescue Plan. Any possible fourth stimulus check, however, will face a legislative challenge.

Is a fourth stimulus check possible? 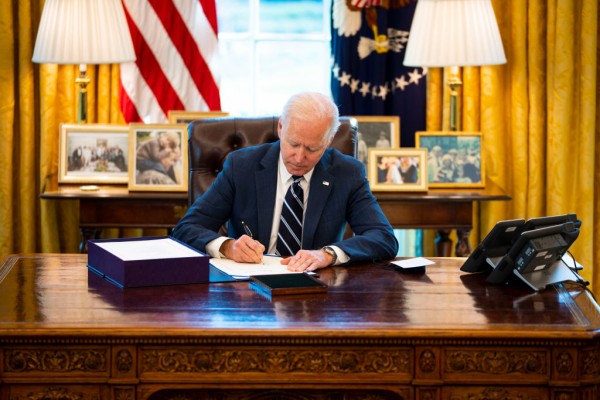 (Photo : Doug Mills-Pool/Getty Images)
WASHINGTON, DC - MARCH 11: U.S. President Joe Biden participates in a bill signing in the Oval Office of the White House on March 11, 2021 in Washington, DC. President Biden has signed the $1.9 trillion COVID relief bill into law at the event.

Once President Joe Biden signed the $1.9 trillion package, which is scheduled to happen on Friday, the Treasury Department will begin sending out the third round of payments to qualifying Americans. Full payments of $1,400 will be in bank accounts at the end of the month, with people making less than $75,000 and couples earning less than $150,000, with payments phasing out at $80,000 for individuals and $160,000 for couples.

This is better than the original two stimulus checks of $1,200 and $600, increasing the likelihood of a new round of payments to Americans. A group of 50 Democratic US lawmakers signed a letter urging the Biden administration to proceed with recurring checks prior to the passage of the stimulus package, which provided billions of dollars to help schools and colleges reopen as well as funds for vaccination delivery.

Read also: Third Stimulus Check: Why Do You Need to Track It?

The letter, which was also signed by CPC chairwoman Pramila Jayapal (D-WA) and Rep. Alexandria Ocasio-Cortez (D-NY), did not indicate the amount of any potential fees although progressives have expressed support for monthly $2,000 checks. "During this public health and economic crisis, one more check is not enough," Minnesota Representative Ilhan Omar and the other lawmakers wrote in a letter signed last month.

However, since it was part of budget reconciliation, the third stimulus check succeeded with just a straight majority in the upper house, without the need for Republican support in the divided upper house. Besides, Democrats will have to wait until after October 1 to use this process again since it can only be used once a fiscal year. By the time Biden's administration could have moved on to other issues like climate change and health care, Newsweek via MSN reported.

Democrats faced a close deadline with passing this round of COVID relief bill before unemployment benefits expired on March 14. They won't expire again until September 6, so lawmakers won't be under as much pressure. Senators could also be more interested in using the mechanism to pass an infrastructure package later in the year rather than another stimulus bill, which has little Republican support.

Read also: Third Stimulus Check: Are You a Recipient?

Third stimulus check: Is it the last?

Although some progressives would like to see more relief, the issue's politics are likely to get complex. "You'll have to ask the virus," Speaker Nancy Pelosi said Tuesday when asked if there will be another round.

Senate laws are one of the main reasons that a fourth stimulus check would face opposition at first. According to The Denver Channel, only reconciliation allowed the third stimulus check to pass the Senate.

The number of times Congress will use this procedure per year is capped under current law. Senators could be more likely to spend it on infrastructure legislation than another COVID relief bill, which failed to gain Republican support.

Biden and the Democrats have one more opportunity to use the streamlined, go-it-alone strategy this year, and they'll have to wait until the new fiscal year begins on October 1 to do so. With other issues such as climate change, health care, and housing in his mind, the president is unlikely to take up his remaining time to distribute further stimulus checks, as per Marca.

Read also: Stimulus Check: The Good, Bad Side that Would Surprise You