In Telegram's Park Sabang, Jo Joo-bin, the key culprit, was sentenced to an additional five years in jail in a proceeding in which he was even further tried for similar offenses such as concealment of illegal proceeds. Jo Joo-bin was sentenced to 45 years in prison in addition to 40 years of imprisonment originally sentenced for the dissemination of sexual abuse.

Jo Joo-bin was senteced over illegal proceeds and sexual exploitation 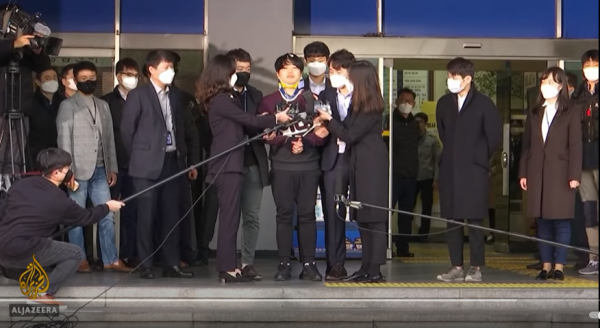 (Photo : Al Jazeera English/ Youtube Screenshot)
The alleged operator of secret sex abuse chatrooms says he "lived the life of a devil" as he was paraded outside a South Korean court. South Korean police took the unusual step of publicly identifying the 24-year-old accused leader of an online sexual blackmail ring after the case led to a national outcry in a country still focused on battling the coronavirus outbreak. Prosecutors will now decide whether to formally charge him. Al Jazeera’s Sara Khairat reports.

According to DongA, in a trial on charges of related rape and criminal proceedings, Jo Joo-bin and his accomplice Kangmo were sentenced to five years in jail and two months in prison by the 30th Division of the Penal Arrangement of the Seoul Central District Court Deputy Judge Lee Hyun-woo.

Besides, the court required Mr. Cho to complete a 40-hour program to prevent sexual harassment, share and record personal information for five years, and restrict employment for five years in child and youth institutions and disability welfare facilities.

"Mr. Jo has some agreement with the victims and took into consideration the fact that he was recently convicted as a candidate to a heavy sentence and the appeal hearing is pending. I felt it was impossible to do," said the judge.

"I took into account the fact that the profits I earned were not large and the appeal trial was ongoing," the judge said, saying, "Nevertheless, it is hard for Mr. Kang to escape imprisonment for committing a crime during a crime."

In October last year, Jo Joo-bin was arrested on charges of hiding the earnings of around 108 million won more than 53 times as a means of trading money in virtual currencies from the fraud proceeds of Park Sabang. In November 2019, Jo Joo-bin was also charged with spreading sexual abuse to 7 children and teenagers and 15 adults and distributing sexual exploitation to 3 adults in March 2020.

As the extent of criminality is coming out in the open, the Telegram Nth Room Scandal's latest report has left the people of South Korea shocked. A 'One Night of TV Entertainment' program unveiled alarming news that several Korean stars became victims of the Nth Space when their images were used to create deep fake pornography.

According to data, Jo Joo Bin used machine learning methods to control images and replace the female victims forced to behave with the mask of a female idol in videos. Reporter Hwang Duk Hyun clarified the same thing, saying that images of several idols were used to deceive people into purchasing the videos produced in the Nth Room to get more money.

It was also said by reporter Duk Hyun that these videos were professionally made. And the idol agencies whose faces in the videos were misused had no idea about it. They're now talking about the case. The idols and their agencies have been shocked by this knowledge, the IBT reported.

Jo Joo Bin had set up three wireless payment wallets. There were two wallets to confuse investigators. These two wallets could be found through Google search. But the third wallet was used to make and collect transfers and was illegally used, and only Joo Bin was aware of the information.

Since September 2019, the Seoul police have been investigating the Nth Room situation. The cops have collected 15,000 names so far from the users who used the Nth Room chat rooms. But the police said a lot of people were sharing one chat room, so the number of users could be higher.

Reports say that 20 pieces of digital evidence, including nine mobile phones, were confiscated by the police. The police cracked open seven phones, and the records were reviewed, but no new details about the crime were discovered.

But two more phones are said to be encrypted and can't be cracked. In terms of unlocking these two devices, Jo Joo-bin is said not to be cooperating. President Moon Jae In has vowed the government will take strict measures in the Telegram Nth Room scandal.

Read also: WHO Admits Wuhan Research Mission Will Not Reveal How COVID-19 Gets Transmitted To Humans From Animals