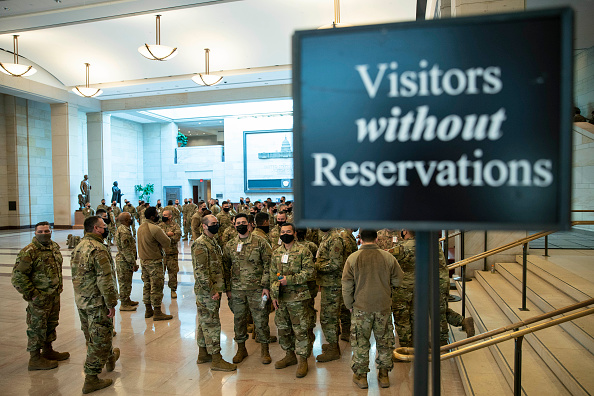 Officials told CBC News that 38 Capitol Police officers and 150 National Guard members tested positive for the coronavirus after responding to the U.S. Capitol riot this month.

The cases "spiked" since the January 6 Capitol attack that brought the police in close quarters with rioters, the chairman of the union representing Capitol police, Gus Papathanasiou, told CBS News.

In the wake of the attack, more than 25,000 National guard members were deployed to Washington DC.

Photos showed guardsmen resting in close quarters inside the Capitol building. Over half of the guardsmen will go home in the coming days.

Besides the National Guard troops and Capitol police, Representatives Pramila Jayapal and Bonnie Watson Coleman also tested positive for COVID-19 after the attack. During the riot, lawmakers were forced to hide together in a secure room, and the proximity caused concern of a super-spreader event.

Democrats accused Republican colleagues of refusing to wear face masks while sheltered together, as per the CBS News.

More Than 120 suspects have been hit with federal charges from the January 6 riot that killed five people. The FBI continues searching through social media, personal videos, and tips to find more suspects.

On Friday, approximately 150 out of 26,000 National Guard members deployed to the Capitol tested positive for COVID-19 as thousands of them departed Washington DC, U.S. officials said.

The troops sighted through images in close quarters within the Capitol Visitor Center raised concerns that social distancing guidelines had been impossible during the incident.

According to WLTX, it remains unclear whether defense officials informed Mayor Muriel Bowser's office of the testing data or if the diagnosis constitutes a super-spreader event.

Murphy said, "When National Guard members departed from their individual states and upon arrival to the D.C. Armory, they had their temperatures checked and completed a screening questionnaire."

He claimed that masks and social distancing were required in the mission, and they followed these procedures daily.

Wall Street Journal reported the developments first, which was confirmed by CBS News.

Less than half of the 26,000 members who served on the Inauguration day remain on duty, as per the National Guard. Arrangements are also being made to send 15,000 National Guard members home within five to ten days, the Guard added.

D.C. urged unarmed guard members to be trained to provide crowd management and public safety support through the manning of traffic control points.

In a recent HNGN report, nearly 5,000 guardsmen were brought to protect the newly-elected President Joe Biden during his inauguration on Thursday.

They were forced to take shelter in an underground parking garage after being told to leave the Capitol building.

Former President Donald Trump offered his luxury D.C. hotel to thousands of National Guard troops who were kicked out of the Capitol. The move caused an intense backlash after it was revealed that soldiers were forced to sleep on the ground in freezing temperatures and had only one bathroom and one power outlet.

Read also: Trump Offers Washington DC Hotel To National Guards Kicked Out of the US Capitol