The petition urge debates between university students and MPs 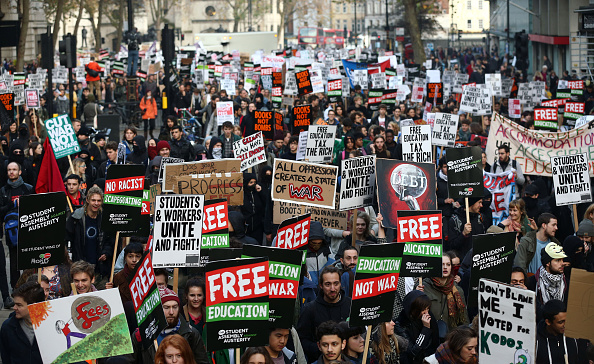 (Photo : Carl Court/Getty Images)
A National Day Of Protest Is Held As Students Demonstrate Over Tuition Fees LONDON, ENGLAND - NOVEMBER 19: Students take part in a protest march against fees and cuts in the education system on November 19, 2014 in London, England. A coalition of student groups have organised a day of nationwide protests in support of free education and to campaign against cuts.

The maker of the petition named on the parliamentary website as M Osman believes that the current tuition fee is "too high," significantly when the coronavirus pandemic disrupts people.

According to Evening Standard via MSN, the appeal received a spike in support since Prime Minister Boris Johnson announced universities would need to move almost all teaching online amid the third national lockdown. The new guidance on the return of the university campuses divided students into two groups.

Those who have the course medicine, veterinary, dentistry, science, social work, or education will resume for the spring term after being tested twice or taking self-quarantine for ten days. All other students are then told to remain with their term online with distance learning in place to last until mid-February.

On Tuesday, PM Johnson told a Downing Street press briefing the government would search for students' arrangements and advised them not to return to their accommodation. "What we hope is that they (students) will get online learning that will allow them to continue with their degree courses," he said.

However, Johnson added that there would be issues with their accommodation cost that the government will have to look at as a government. They need to see the arrangements the universities set to deal with the reasonable concerns of many students.

Exams cancellation will risk the futures of young people

This decision to change the process of students' merit will risk the futures of millions of young people, as per HuffPost via MSN.

In an EAR study, students' experiences were explored following last year's announcement of exam cancellations. It revealed that 80% of students were concerned with their grades being predicted. Also, nearly a quarter (23%) are worried that their teachers would discriminate how the exam cancellations disenfranchise most vulnerable and marginalized children.

Multiple reasons were cited for the students' concern. The 50% of students are worried that their learning style would not be accounted for, such as the cramming of revision before the exams could not be captured by predicted-based class assessment often over six months prior to the exams.