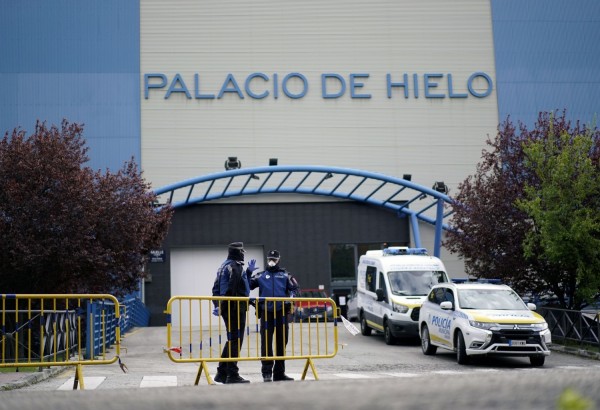 (Photo : REUTERS/Juan Medina)
Local police stand guard outside an ice rink, which will be used as a morgue, during the coronavirus disease (COVID-19) outbreak in Madrid, Spain, March 24, 2020.

To accommodate the rapidly increasing deaths caused by the COVID-19 pandemic, an ice rink in Madrid, Spain was turned into a morgue temporarily.

The country's military unit has been transporting the remains of people who have succumbed to the disease that first emerged in Wuhan, China before turning into a pandemic, to Palacio de Hielo or Ice Palace in the neighborhood of Hortaleza in Madrid, according to Madrid regional president's office.

Moreover, the regional government also said that this is both a temporary and extraordinary measure which is designed to reduce the pain of the families that have lost their loved ones in the crisis.

Spain currently holds the fourth-highest number of confirmed COVID-19 cases worldwide, following, China, Italy, and the United States. The country also holds the third-highest death toll. On Tuesday, the office of the prime minister said that there are already 39,673 cases and 2,696 deaths reported in the country.

On Monday, the municipal funeral service, the city's major provider, announced that they were halting on the collection of bodies by Tuesday due to the scarcity of protective materials for their workers. The move made quite an impact since they manage services for 14 cemeteries, two funeral parlors and two crematoriums in the city.

The funeral service also said that cremations, burials and other services will still continue as usual as long as bodies will be sent by other funeral services businesses in closed coffins.

Being the epicenter of the outbreak in Spain, Madrid's region president Isabel Diaz Ayuso said that the expected number of possible COVID-19 cases to hit the country is almost 80% of its population. She also added that despite this, most of the cases will only exhibit mild symptoms. However, it might be a problem for the vulnerable population of the city which is about 15% of the population.

The country has been under lockdown and state of emergency since the 13th of March. The lock down was initially set to only last for 15 days but Prime Minister Pedro Sanchez on Sunday said that it could extend to another 15 more days depending on the severity of the outbreak and the result of teh parliament's debate on Wednesday.

There are already emergency hospitals that have been set up all over the country and the residents have been ordered to stay at home apart from taking essential trips which turned the usually busy streets deserted.

On Tuesday the government also ordered senior citizen homes to inform the authorities of any deaths that may occur, especially after military found abandoned retirement homes with the elderly left behind and some of them dead on their beds.

Funeral homes also on the frontline of COVID-19 crisis

Whilst, Personal Protective Equipment (PPE) are being directly sent to hospitals, the funeral homes in Spain are also suffering from the lack of equipments.

According to the manager of Funerarias Madrid, Mario Navarro, their company has already stocked up on PPEs before the situation explode. However, the sudden surge in the number of deaths has depleted their stocks and forced them to reuse gloves and masks after carefully sterilizing.

He also said that being on the front line, they have also recorded casualties and they are also struggling with the lack of resources like the healthcare frontliners.