CNN meteorologist Monica Garrett said that an unexpected snowstorm should likely move to south off the coast of New England Monday night and on Tuesday morning, she also notified 6 million people about the impending winter storm in the interior Northeast and New England that would hit anytime soon.

Heavy snow more than 6 inches high are all over in some places of Adirondacks, Berkshires, Catskills, Green, and White mountains. Also, Garrett said that some areas in the valley and lower elevations inland from New Jersey to Connecticut could see up to 2.5 inches of snow.

The Weather Service of Boston said on Twitter that the best chance for affecting snow is across inner southern New England especially the Worcester Hills and the slopes of the Berkshire where the snowstorm will hit and might produce some strong winds and small tornadoes.

Garrett also said that the Mid-Atlantic may avoid the snow but is still expected to be drenched by moderate to heavy rain. While the coastal cities including New York and Boston will experience heavy rain with the possibility of snow, mixing in at times.

There are two different possible tracks and two potential results of the snowstorm in these models.

Based on this forecase, the storm will be stronger and will track closer to the northeastern coastline. This will result to a higher chance of snowfall for the inner part of the Northeast, and higher possibilities of rainfall and strong heavy winds for large coastal cities. The inner parts of the Northeast could get 6 to 12 inches of snow, while the coastal regions could get 1 to 3 inches of rain which could result in flooding of the cities. 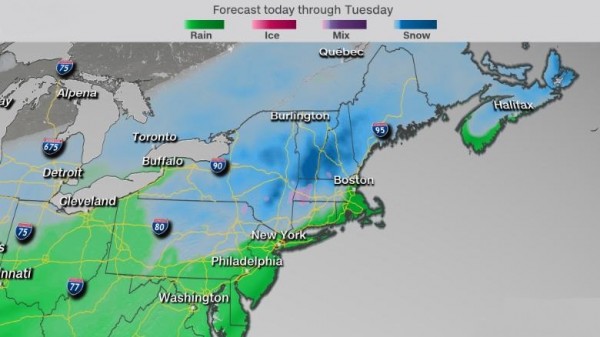 (Photo : Youtube)
The European model of forecasting the storm.

The American model is showing a frail storm that is far off the coast. Expect less snow, unsteady rain, and weaker winds across the Northeast till Tuesday. On higher elevations in the valley like in the Green, White, and Adirondack mountains might see snow. 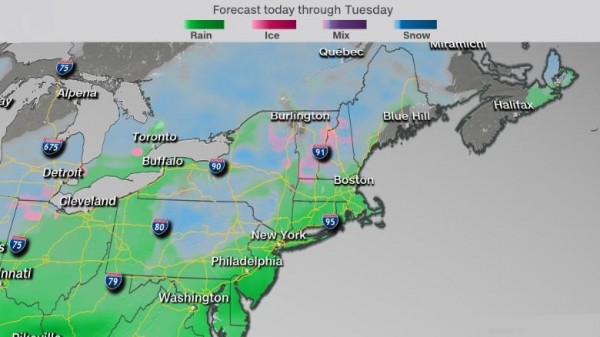 (Photo : Youtube)
The American model of forecasting the storm.

The "Benchmark" is a radar term for the latitude and longitude of 40 degrees north and 70 degrees west. The American model takes the storm all the way to the east of the Benchmark while the European model takes it closer to the storm.

With the help of this benchmark, meteorologist can decide how much snow the storm will develop and where would it land. Distant west of the mark and the northeast commonly get mostly rain with a bit of snow. Too far east and the system is distant from the coast to bring amply moisture that causes excessive rain and snow to the region.

(Photo : Youtube)
The “Benchmark” is a radar term for the latitude and longitude of 40 degrees north and 70 degrees west.

Below is quick-moving framework and ought to be through by Tuesday for most places, there is a possibility of another round of snow on Wednesday across the same areas.

Related Article: Storm Dennis to Bring a Month's Worth of Rain, Disrupts Half Term Travel Plans