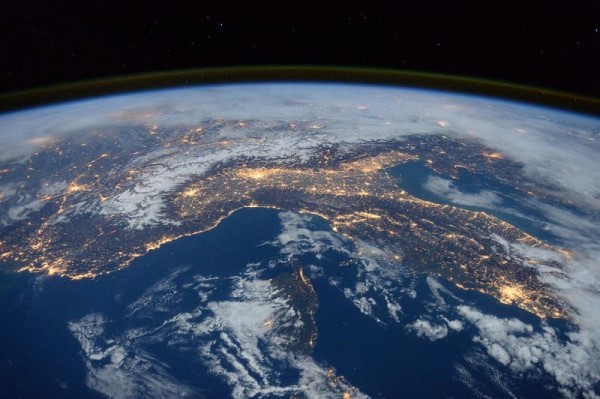 (Photo : REUTERS/NASA/Tim Peake)
A photo taken by Expedition 46 flight engineer Tim Peake of the European Space Agency (ESA) aboard the International Space Station shows Italy, the Alps, and the Mediterranean on January, 25, 2016.

The National Aeronautics and Space Administration (NASA) is always on the lookout for asteroids which poses a possible threat to life on the planet. These asteroids, known as "Potentially Hazardous Asteroids," are near-Earth asteroids which have passed a certain threshold and are considered dangerous.

In light of this, the space agency in the United States stated that there is one of those NEAs that is set to pass Earth on Thursday, March 26, hurling at a speed of 53,000 mph.

The asteroid known as 2012 XA133, measures around 1,280 feet wide and is enough to cause a possible catastrophic impact on Earth if it collides with the planet. However, NASA engineers have calculated based on the asteroid's trajectory that it will pass through the planet safely.

Based on their calculations, NASA believes that the asteroid will pass 0.04453 astronomical units (AU) or around 4.1 million miles from the Earth's center.

NASA explained that Near Earth Objects, (NEOs) occasionally approach the earth as they orbit the sun. But they also noted that a close passage from the astronomical point of view can be very far away in human terms.

Aside from NASA, the asteroid is also being tracked by the European Space Agency (ESA).

Whilst the said asteroid is only one of the six asteroids that are being tracked by the space organizations this week, it is the only one that falls in the parameters of being considered as potentially hazardous.

As if we didn’t have enough to worry about already: NASA Warns 6 Asteroids To Approach Earth This Week https://t.co/KF07NEezwY — Jeffrey Schweers (@jeffschweers) March 24, 2020

NASA further explained that PHAs are defined based on certain parameters that measure their potential to cause a life-threatening approach on the planet. They further added that there are about 100 tons of interplanetary materials that fall down to the surface of the Earth on a daily basis.

Moreover, they indicated that the majority of the larger interplanetary materials that reach the planet's surface come from the fragments caused by the collision of asteroids that ran into each other eons ago.

How often do these PHAs pass through Earth?

However, the agency is not go into detail on what could possibly happen if these PHAs end up colliding against the Earth. They only stated that these rocky or iron asteroids that reach Earth's surface and cause local disasters or produce tidal waves that can wipe out coastal areas happen only in an average interval of about 10,000 years.

In addition, it was also stated that asteroids larger that one kilometer and cause cataclysmic global disasters only com every several hundred thousand years. If such an impact happens, the debris would spread throughout the planet's atmosphere and cause acid rains, partial blocking of sunlight and possible firestorms from the impact debris raining back down on the surface.

NASA also stated that since the orbital paths of these asteroids often cross the Earth's own orbital path, it is important for space agencies to keep track of these events. They also said that there is still the possibility of the asteroids colliding with the planet since it has already happened in the past. Thus, it is prudent to give more effort into studying these objects and to keep an eye on their future trajectories.

Related article: NASA Could Return to Uranus, Neptune in a Planetary Alignment by 2030