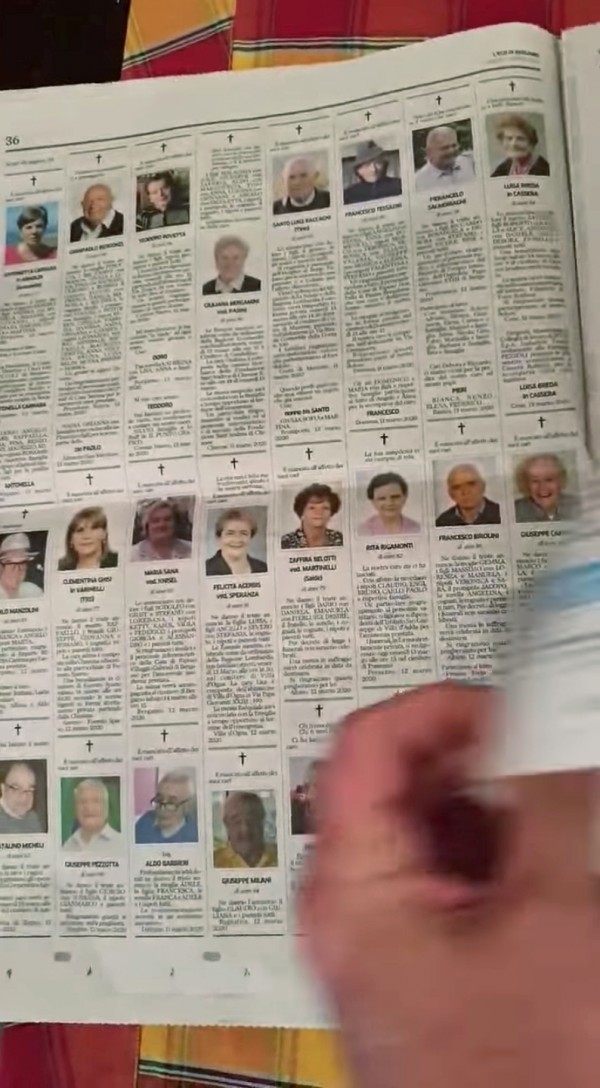 (Photo : Giovanni Locatelli via REUTERS )
A page of L'Eco di Bergamo, published on February 9, 2020, is pictured with death notices due to the outbreak of the coronavirus, in Cerete, Italy, March 13, 2020 in this screen grab taken from social media video and obtained by Reuters on March 15, 2020.

An 85-year-old man name Renzo Carlo Testa died of coronavirus in a hospital in Bergamo Northern, Italy. After five days, his remains are still in a coffin in line with others who fell victim to the coronavirus in a church that is closed to the public.

Testa is just one of the many victims of coronavirus who were not given a proper funeral no matter how his wife Franca Stefanelli to whom he was married for 50 years wanted. This is due to the national restrictions that Italy has ordered against gatherings making traditional funeral services illegal in the country. Restrictions that were set in an effort to control the spread of coronavirus within the country with the largest density of cases outside China. However, even if there were no restrictions on funerals, Stefanelli and her son would still not be able to attend Testa's funeral for they are also sick and are under quarantine.

The 70-year-old Stefanelli expressed that she cannot explain what she was going through at the moment but narrowed it down to frustration after being rendered impotent by the virus.

Meanwhile in Britain, an autism campaigner expressed grief as her mother died while in the coronavirus isolation after being admitted for only a day.

Fifty-seven-year-old Caroline Hopton from Windsor Berkshire was heartbroken after she was not event given the chance to hold much less stay with her mother as she took her final breath.

Despite not being a confirmed coronavirus case, Hopton's mother was placed in isolation as healthcare workers wanted to be sure and ready in case she tests positive, however, she died before any confirmation was made.

Devastated by the events, Hopton took it to twitter to express her sadness after COVID-19 stopped her from holding her mother's hands in her final moments.

People are dying and being buried alone

The COVID-19 pandemic raged through Italy and has forced the government to order a nationwide lockdown. The country's streets are now empty, shops are shut down and more than 60 million Italians are trapped inside their own homes. In addition to that, is the exhausted healthcare front-liners who are working hard to battle the coronavirus crisis.

However, the ultimate measure of the pandemic is the number of bodies that it leaves behind. In Italy for example, the death toll has reached more than 2,100. In the northern region of Lombardy, particularly in the province of Bergamo bodies are already piling up.

As the hospital morgues have become overwhelmed by bodies, for the first time since World War II, closure of cemeteries in the province has been ordered by Bergamos's Mayor Giorgio Gori, who, however, assures that the mortuary would still accept coffins.

Despite the ban on gatherings which include funerals, officials still allowed priests to say prayers at burials which are attended by a limited number of the bereaved, some even being buried alone after their families are also put in isolation.

Due to the danger of contagion, family members spirited away from their relatives who have fallen victim to the virus. Most people die in hospitals without any friends and family present.

In acts of humanity, some local associations have had the initiative to collect donations in order to procure tablet devices which were given to hospitals so that patients sick with coronavirus will be able to stay in touch with their families. Some even saying their final goodbyes tot heir loved ones through the screens as the virus takes them into oblivion.

Related article: Italians Sing from Balconies as a Symbol of Solidarity Amid Coronavirus Outbreak