Progressive members of Congress have written to President Joe Biden and CDC Director Rochelle Walensky, urging the CDC to use all available power to prolong the eviction moratorium. 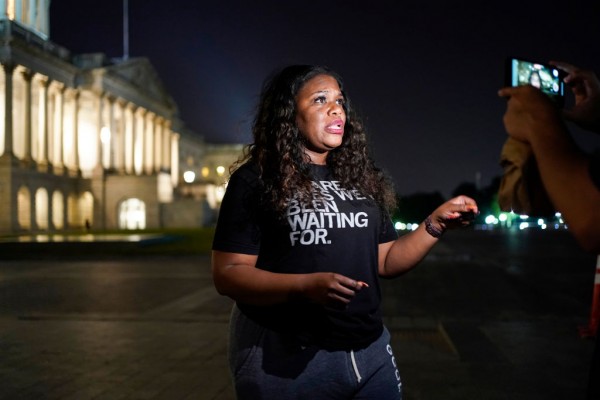 (Photo : Joshua Roberts/Getty Images)
Rep. Cori Bush (D-MO) speaks with supporters as she spends the night outside the U.S. Capitol to call for an extension of the federal eviction moratorium.

In a recently published article in The Hill, House Democratic leaders failed to muster enough votes on Friday to extend the federal eviction prohibition just two days before it was due to expire, sending the house into long summer vacation with no clear way forward on the subject.

Following hours of inaction on the House floor as Democratic leaders sought to rally support for the legislation, Majority Leader Steny Hoyer attempted to pass a measure by a unanimous agreement that would have extended the moratorium until Oct. 18, but Republicans opposed.

Furthermore, nearly $47 billion in federal housing assistance to states during the epidemic has been delayed to reach tenants and landlords due to payments, putting more than 3.6 million Americans in danger of eviction, some in as little as a few days, according to a published report in Oregon Live.

Several Democratic lawmakers stated in their letter that the looming eviction issue is a question of public health and safety, and it requires an immediate government reaction in the face of the continuing pandemic and increasing outbreaks of the Delta variant throughout the country. Before it is too late, the Centers for Disease Control and Prevention must use every power at their disposal to prolong the eviction moratorium, according to a published article in MSN News.

The legislators stated in their letter that they would continue to work on legislation to address the expiration moratorium, as well as to get billions in previously authorized funds out to assist tenants and landlords, a process that has been sluggish to start.

Meanwhile, Biden would have supported the CDC extending the prohibition, but the Supreme Court has made clear that this option is no longer available, according to White House press secretary Jen Psaki, who also called on Congress to act.

States Where Eviction Moratorium Will Remain

In a recently published article Associated Press, Eviction moratoriums will be in effect until the end of the year in New York, New Jersey, Maryland, Illinois, California, and Washington, DC. However, evictions may start on Monday in other parts of the country, resulting in a year's worth of evictions across many weeks and ushering in the biggest housing crisis since the 2008 financial crisis.

The eviction restriction was enacted to limit the spread of the virus among those who were thrown out on the streets or into shelters. During the pandemic, Congress authorized almost $47 billion in federal housing assistance to states, but it has taken a long time to reach tenants and landlords who owe money.

Attempt To Extend the Eviction Moratorium

Democrats rushed to write a measure and gather the votes in time to react. Speaker of the House Nancy Pelosi urged her colleagues to approve legislation to extend the deadline, calling it a "moral obligation" to safeguard tenants and landlords who are due money.

Meanwhile, the National Apartment Association and many others filed a federal lawsuit this week seeking $26 billion in damages as a result of the moratorium's effect. Despite behind-the-scenes fighting all day, Democratic legislators had questions and reservations about the ban and were unable to gather enough support to prolong it.