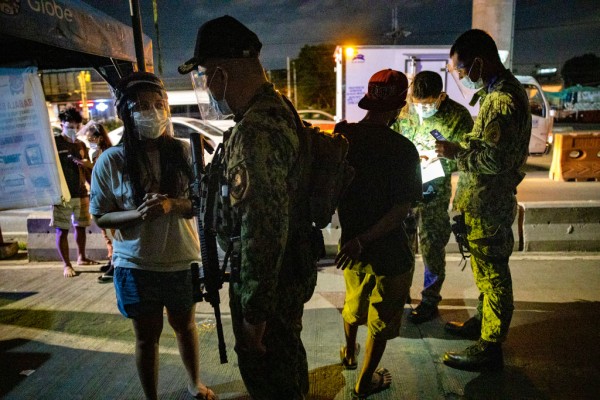 (Photo : Ezra Acayan/Getty Images)
Police officers apprehend curfew violators at a quarantine checkpoint as a strict quarantine is reimposed in Manila and surrounding provinces to curb the spread of COVID-19

The Filipino man was identified as Darren Manaog Peñaredondo, who was apprehended on April 1 in General Trias City, south of Manila, by village watchmen. According to the report, he was buying water after 6 p.m., which is beyond the implemented curfew that lasts from 6 p.m. to 5 a.m.

In a published article on CNN News, Reichelyn Balce, wife of the 28-year-old Filipino man, said that her husband was ordered to perform hundreds of squats along with other curfew violators. She also added that her husband had a heart condition, and he could barely walk when he got home a day after.

Balce also said, "He said they were made to do pumping exercises for 100 reps. If they're not in sync, they have to start over." Meanwhile, Peñaredondo's cousin posted on social media that his cousin had a convulsion, and they were able to revive him at home. However, he died hours after he was rushed to the hospital.

In a recently published article on Yahoo News, Philippine authorities are already investigating the death of a 28-year-old Filipino man who broke the local curfew.

Ildebrandi Usana, National Police spokesman, said the city's police chief and two officers had been removed from their posts while the investigation is ongoing to ensure that they cannot influence the investigation.

Usana told the reporters that Peñaredondo and other violators were made to perform a knee-bender exercise. The Police spokesman admitted, "It's painful. If that's the requirement, you will really pass out especially, if you're not used to it. Even policemen themselves find it difficult."

Philippine police authorities have punished thousands of people for violating the curfew imposed last week due to the spike of new COVID-19 infections in Metro Manila and four provinces surrounding the National Capital Region.

It is one of the protocols implemented in the country in an attempt to curb infections. At present, the country has recorded more than 828,000 cases with a daily positivity rate of almost 25 percent, five times higher than the World Health Organization's positivity rate, which is 5 percent and below. Additionally, around 14,000 Filipinos already died due to the infectious and deadly COVID-19.

Meanwhile, human rights groups have raised concern over the excessive punishments for people caught violating the curfew and other restrictions. The Justice Secretary also said on Monday that police authorities should consider community service instead of extreme exercises.

Different local units across the Philippines are implementing various restrictions in an attempt to mitigate COVID-19. Different punishments were also imposed on the violators, but there is now a call to let them do community service instead of rigorous exercise.