According to government scientists, a possible COVID-19 third wave threatens Europe and will likely cancel the summer holidays, following an increase in COVID-19 cases across the country. Outbreaks of the South African strain in countries across Africa raise the alarm, prompting calls for stricter travel restrictions. 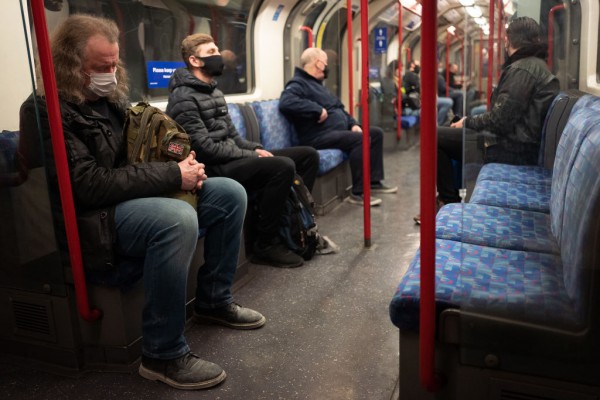 (Photo : Leon Neal/Getty Images)
COVID-19 Deaths Among TFL Workers Raises Concern For Staff Welfare LONDON, ENGLAND - JANUARY 15: People travel onboard the underground train system on January 15, 2021 in London, England. At least sixty Transport for London workers have lost their lives to the COVID-19 virus since the pandemic began, sparking fresh calls for people to only travel on the network if absolutely necessary.

As a result, some experts believe that the European summer holidays in May and possibly in the months ahead, which were previously expected by millions of Britons, are now in danger of being canceled. While the vaccine plan in Europe has been a big success, with a record 660,276 shots administered yesterday and a drop in cases and deaths, the continent's situation appears to be very different. According to Daily Mail, the EU has watched over a failed vaccine delivery scheme, with the number of positive tests increasing in countries like France, Spain, Germany, and Italy.

British scientists are worried because similar scenes earlier in the pandemic have often foreshadowed a similar UK situation. "It's a fact that when waves one and two hit Europe, they hit us later," a government source told The Times.

This weekend, a new month-long shutdown was enforced in Paris and other regions around the Channel. Scientists are worrying that one in ten of the 35,000 daily cases reported in the capital might be the South African strain. The COVID-19 strain, officially known as B.1.351, is what the scientists are more worried about because it makes the new crop of vaccines marginally less effective.

Although vaccination provides some protection in the United Kingdom, millions of young people are already on the waiting list and are at risk of contracting the virus. While experts are not advising the Prime Minister to change his current strategy to relax controls, a spike could provoke a shift in thinking about the reopening of shops and outdoor hospitality in the coming weeks.

Professor Neil Ferguson said yesterday that Britain would hold out the South African variant, suggesting that international summer plans would have to be canceled.

A SAGE adviser called 'Professor Lockdown' after his pessimistic forecasting of the first wave scared ministers into a spring shutdown, said the alarming COVID-19 strain was responsible for a 'significant number of new cases on the continent. He did not ask for an immediate travel ban, but he did suggest that strict supervision and quarantining at airports and borders would need to be maintained.

Up to 344 cases of the South African variant have been confirmed in the United Kingdom, prompting surge testing in thousands of postcodes in an urgent effort to find every single infection. It came after a report released yesterday by Oxford University discovered that its COVID-19 vaccine induces seven times fewer antibodies against the South African variant than the initial strain. Pfizer's vaccine yielded nine times less results.

However, antibodies are just one component of the immune response to COVID-19; white blood cells, for example, play an important role. Last month, the head of Oxford's vaccine trials said that catching the South African strain following vaccination would not cause significant illness but would give people the sniffles.

Europe's airlines and travel industry are bracing for a second lost season, as the rollout of the COVID-19 vaccine is delayed, Reuters reported. On Friday, airline and travel supplies dropped after Paris, and most of northern France shut down for a month, just days after Italy imposed severe business and travel restrictions throughout the world, including Rome and Milan.

The setbacks have affected recovery hopes for the critical peak season, whose earnings help airlines get through the winter months, where most airlines lose money even in good times. Increasing infections in Greece and elsewhere have also harmed the summer outlook, as has several European countries' suspension of AstraZeneca's vaccine due to safety concerns.

This week, some countries reported that they would resume using the AstraZeneca shot after the European Medicines Agency determined that the benefits clearly outweighed the dangers. Airlines that have already accumulated billions in debt face even more pressure, and others will not survive without additional financing. IAG, the British Airways owner, received $1.43 billion in a bond offering on Thursday, claiming that the funds would shield the business from a prolonged downturn.