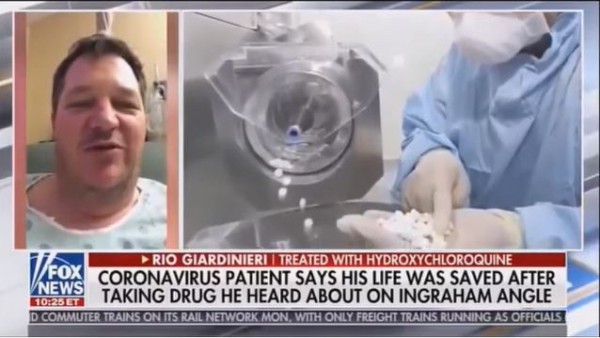 (Photo : Youtube/ no one)
Screenshot from Youtube video featuring COVID-19 patient, Rio Giardinier during his interview in The Ingraham Angle.

COVID-19 patient, Rio Giardinier stated during an interview with The Ingraham Angle how the drug hydroxychloroquine may have saved his life as he fought for it against the coronavirus.

According to the 52-year-old patient, he became unwell after coming down with a fever for five days which was accompanied by back pain, headaches, cough, and fatigue. He also stated how he reached the point where he could barely speak and had difficulty breathing, prompting him to go to Joe DiMaggio Hospital in South Florida, where doctors diagnosed him with pneumonia and coronavirus.

During his interview with Laura Ingraham, Giardinier stated that although he was not a doctor or a scientist, he knows what is happening in his body. He said that while he was in pain, he was given different kinds of antibiotics which did not improve his condition.

In addition, he even noted how his condition worsened despite the drugs that were being administered. That is when a friend of his told him about the drug hydroxychloroquine and advised him to ask his doctor to give it to him.

According to the patient, during that time, he has not seen any hope and did not have any other options and asked his doctor and nurse about the drug, adding that it was a risk worth taking for his life.

He also told Ingraham that soon after he was treated with the hydroxychloroquine, he felt better than he has in days. Also adding that after taking the drug, all his other symptoms were gone except for a mild headache.

Read also: Chloroquine vs. Hydroxychloroquine: What is a Better Drug for Coronavirus Cure?

Hydroxychloroquine, is a drug that has been used to prevent malaria in the past. At the moment, the said drug has shown potential as a possible treatment for the Coronavirus Disease. Last Wednesday, the World Health Organization also announced that there are already clinical trials going on in different countries on four drugs which may be the key to ending the pandemic and one of these drugs is chloroquine.

The drug that was used to treat malaria in 1944, is already widely available and could be used off-label, however, Stephen Hahn, commissioner of the Food and Drug Administration said that officials are requesting a formal study to test the drug's effectiveness before it can be approved.

In a news conference that was held on Sunday, New York Governor Andrew Cuomo announced that the state, which is currently at the center of the outbreak in the US has already acquired 70,000 doses of hydroxychloroquine which started clinical trials on Tuesday along with 10,000 doses of Zithromax and 750,000 doses of chloroquine.

Despite US President Donald Trump calling the drug a "game changer" and expressed his enthusiams for the possible COVID-19 cure, it has not yet been proven effective against coronavirus itself.

According to the director of the National Institute of Allergy and Infectious Diseases, Dr. Anthony Fauci, who is also the White House's coronavirus expert, there is still a lot of work to be done before it can be called a solution to the COVID-19 crisis.