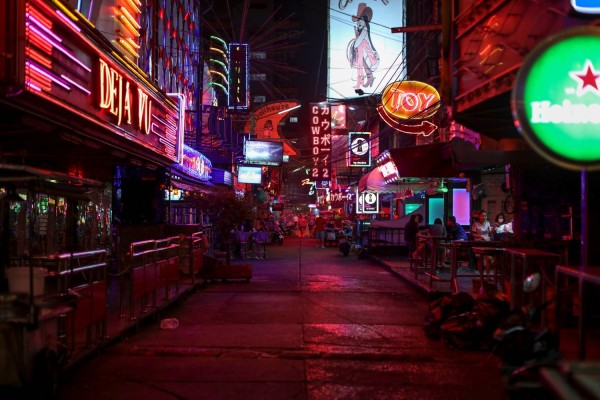 (Photo : REUTERS/Jorge Silva)
Ight clubs and go-go bars street Soi Cowboy is seen empty after Thai government ordered the closure of cinemas, bars and other entertainment facilities as part of a raft of measures intended to control the spread of the coronavirus disease (COVID-19) outbreak in Bangkok, Thailand March 18, 2020.

Amid the hundreds of thousands that have been infected y the coronavirus and with million cooped up in their homes in fears of contracting the disease, young people around the world have disregarded the bans and have carried on with socializing and even help "lockdown parties."

Several countries around the world have already imposed bans and lockdowns due to the widespread COVID-19. It has also been repeatedly reiterated that social distancing is one way to control the spread of the virus, however, young people are still engaging to the widespread parties and gatherings held despite the warning.

Scientists and health officials have already called out the throwing of "lockdown parties" and "end of the world" drinking sessions as irresponsible and that these events are highly contributing to the spread of the virus.

Although there are statistics that show that younger people are less likely to be in critical condition if they catch the disease which is why they believe they have no reason to be scared, there is still a huge chance that they could get infected, be carriers of the disease and infect other people.

Renowned for the non-stop parties and a usual spot for European clubber, Berlin has recently become one of the favorite venues to a huge number of these gatherings. Last weekend, the police have reportedly broken up several gatherings and have forced at least 60 bars and clubs to close after defying a decree by local authorities which ordered the closure of all entertainment venues.

There have also been several reports of so-called "corona speakeasies" In the city, where owners of local bars taped up their windows and kept the doors locked. They only allow guests who have made "reservations" or those who know their "specific door knock." Bar owners who participate in this kinds of operations have been warned by the Berlin Police that if caught, police operations will be done and their bars may be closed down.

In Germany, there have also been reports of similar breached after the closure of schools and universities. Students have reportedly engaged in "lockdown parties" instead of staying home as advised.

Hundreds of university students in New Zealand have also ignored the bans set by the government on social gatherings and parties, as some of them are still going ahead with their plans to push through with the annual Hyde street party on April 4.

The said party is traditionally attended by thousands of freshmen in the universities and is infamous for mass drunkenness, fights, and public disorder. The event has officially been canceled, however, students on social media have indicated that they will push through with the party.

In New Jersey, there have also been reports of an explosion of parties in Princeton University, according to students and local press. Talks of having "last blast" and "dancing under the volcano" parties followed after the university's announcement that all classes were to moved online and that students would be sent home. Furthermore, spring breakers pushed through with partying despite being advised against doing so.

The World Health Organization has repeatedly recommended that social distancing should be observed to ensure safety. Governments have put in a lot of effort to control the spread of the virus, however, some people have repeatedly disregarded these efforts which causes the pandemic to worsen.

Related article : Forecast Says COVID-19 May Infect Half of the World's Population