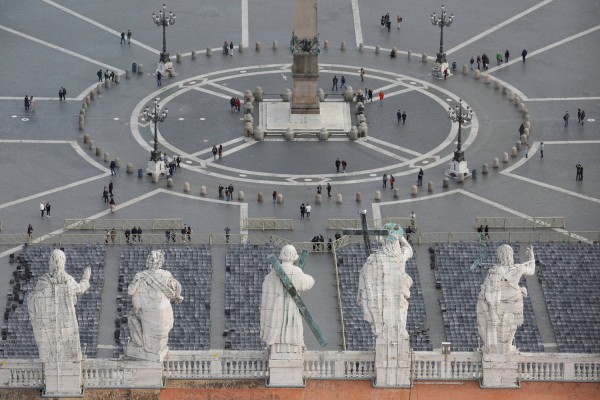 (Photo : REUTERS/Remo Casilli TPX IMAGES OF THE DAY)
General view of St. Peter's Square after the Vatican reports its first case of coronavirus, at the Vatican, March 6, 2020.

The walled city-state of Vatican confirmed its first case of the novel coronavirus and has ordered closure of offices as a precaution while the city-state's sovereign Pope Francis is still recovering from a cold.

According to Vatican's spokesman Matteo Bruni, the Vatican's health clinic which serves the employees of the Vatican and their families was locked down for sanitizing after a patient tested positive for the COVID-19 last Thursday.

A Vatican official was also put into quarantine after a priest from the Catholic Church of France in Rome tested positive for the virus. The official was put into isolation after coming into contact with the infected priest but is not showing any symptoms of the diseases.

In addition, as an added precaution, the Apostolic Library of the Vatican has announced last Friday that it would shut down its doors for the whole week next week. The library has a copy of the Vatican's manuscripts and archives and welcomes scholars from all over the world. The library is expecting a full house next week as they opened the archives of Pope Pius XII, the pope during World War II.

Pope Francis, who has fell ill in the past week and has missed celebrations thanked everyone who responded to medical emergencies. However, the pope has fallen ill with cough and colds, raising concerns from Catholic devout.

In the Pope's official Twitter account, the 83-year-old pontiff expressed his closeness to those who have been infected with the virus and to the healthcare front-liners who are caring for the ill. He also thanked civil authorities and everyone involved in the efforts to assist the patient and controlling the widespread of the outbreak.

Over a week ago, the pope came down with a cold but the Vatican has announced that he has not been diagnosed with other pathologies. Pope Francis has already canceled several appearances including his supposed participation in a week-long spiritual retreat in the countryside of Rome.

Furthermore, Bruni stated that the pope has been responding well to treatment and is recovering from his cold and that he has continued to celebrate daily masses and other spiritual exercises. The pope got ill amid the widespread COVID-19 from the northern parts of Italy to other parts of the nation including Rome.

The Vatican is yet to announce changes in the pope's schedule and how the Vatican's Holy Week activities up to Easter would be altered after the announcement of office closures.

The government of Italy has already ordered that all sporting events be held without sectators and has encouraged the cancellation of mass gatherings. Moreover, they have encouraged Italians to stay at least one meter away from each other. As a result of this, it is expected that the general audiences of the pope will be canceled. Also, given the health and age of the pope, the pope was advised to stay home and limit his visitors.

In the data reported by CNN, the novel coronavirus has infected more than 101,900 and has killed more than 3,400 people worldwide.