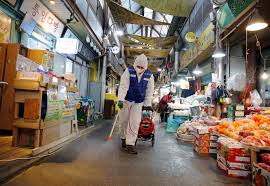 (Photo : REUTERS/Heo Ran)
An employee from a disinfection service company sanitizes at a traditional market in Seoul, South Korea, February 7, 2020.

With no organization and order in providing critical medical gears, the local governments of China's efficiency is slowly revealing its cracks. Since the start of the 2019 novel corona virus outbreak, there has been a massive demand for face masks which can be your first line of defense from contacting the disease. The panic brought about by the spread of the dreaded virus has led people to rush in stores and buy face masks, however, there has been a shortage of face masks ever since CODIV-19 broke out.

China, the country where the corona virus outbreak is most dense, is also the biggest producer of face masks around the world. However, even if all factories run at full capacity, they can only make 20 million pieces of face masks per day, which is not even close to meeting five percent of the needs of the 776 Chinese who are already returning to their jobs in China. In the case of surgical and N95 masks, which provide more coverage, factories in China can only produce about 2.8 million daily, which is relatively low for the 12 million medical professionals in the country.

In order for people to be able to get back to work, for factories to reopen, and to control the spread of corona virus, China needs hundreds of millions of face masks to be produced every day. However, the countries bureaucracy is sending out mixed messages about its ability to provide. Consequences of this has been felt in Hong Kong where panicked shoppers have cleared out shelves of masks and even toilet paper.

Ironically, China being the largest mask manufacturer has already imported more than 56 million masks from other countries. Hon Hai Precision Industry Co., a supplier of Apple already took the matter into its own hands and started their own mask production for their employees.

This has critics saying that once again China's bureaucrats have proven their incompetence in controlling the outbreak, which started in Hubei Province and was accelerated by the slow response of the government.

Hubei Province, the epicenter of the dreaded outbreak is also a major industrial hub for products used in surgical masks. Thus, even when they were under lockdown critics say that they should not be experiencing shortage. However, Chinese officials have told the producers of these products that factories cannot reopen until the February 14 unless their goods are already cleared for sale within China.

Furthermore, it's not only China that is experiencing mask shortage. According to Express UK, 50% of masks used by medical professionals in Britain are imported from China. However, manufacturers have ceased exportation due to the spread of CODIV-19, this has led to suppliers restricting the number of masks that can be bought and some even tripling the prices. Suppliers in the United Kingdom have already applied blanket restrictions, which only let dental professionals to order two boxes of face masks at most per day.

Shortage of face masks due to coronavirus has also affected China's neighbors in East and Southeast Asia.

5 Disastrous TikTok Beauty Tips You Should Not Try