India has experienced the second wave of COVID-19, and thousands of infections and deaths are reported every day. Experts in the country believed that the actual number of cases and deaths is bigger than what is told to the media.

In a recently published article in Yahoo News, there were many reported cases of illegal activities across the country. It includes selling fake canisters, drugs to combat COVID-19, and even beds in hospitals.

The activity alarmed the police because many illegal activities like the selling of fake drugs happened on social media. According to a published article in The Economic Times, the operandi is that a seller will offer drugs like remdesivir for a price five times more than its original price.

Read Also: Countries Help India Amid Devastating COVID-19 Disaster, Here's How You Can Help Too 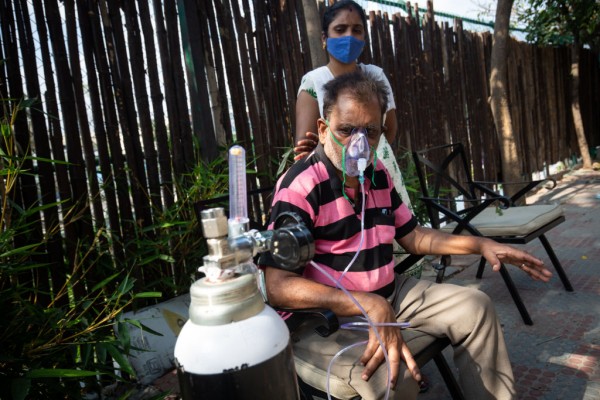 (Photo : Abhishek Chinnappa/Getty Images)
Kavitha S pats the back of her father Subramanya P, 60, as he struggles to breathe with the aid of supplemental oxygen provided by an NGO on a pedestrian pavement.

One doctor's accusations in Madhya Pradesh have gone viral. Dr. Sanjeev Kumrawat said he tried to stop a local activist for India's ruling party from selling access to beds in the government hospital where he works.

In a recently published article in Business Standard, Police officers in the Uttar Pradesh city of Noida arrested two men on Wednesday, accusing them of selling plasma for up to $1,000 per device. According to the police, one of the men used social media to solicit plasma donors for his own needs, then sold the plasma through a middleman.

Helly Malviya, a university student, flagged a Twitter post promoting tocilizumab, an anti-inflammatory medication often used to treat COVID-19 patients with pneumonia but is difficult to find in India. The seller demanded $2,000 upfront. Malviya reported the post as a potential scam and got a flood of messages, but they were from people desperate for the drug.

According to Rohit Shukla, a graduate student in New Delhi, after his grandmother died in a neighboring state in late April, an ambulance driver requested $70 for the three-mile ride from the hospital to the cremation site, ten times more than the usual amount. A staff also asked $70 for firewood that should have cost just $7 when the family arrived.

Some scammers attempt to circumvent certain protections. During a bust this month in the western state of Gujarat, police found thousands of vials of bogus remdesivir. A tip led them to a warehouse, where they seized 3,371 vials containing glucose, water, and salt.

Some of the products are fake, while others are potentially dangerous. Last week, police in Uttar Pradesh accused a gang of stealing used funeral shrouds from bodies and selling them as fresh. The day before, officers in the same state discovered more than 100 fake vials of remdesivir, an antiviral medication that many doctors in India prescribe amid concerns about its efficacy.