In a recently published article in The New York Post, footage of the collapsed bleacher was captured at a synagogue in West Bank. The report said that the video showed people falling and sliding down the bleacher.

Video Captured the Collapse of Bleachers

Moshe Tubolsky told the news outlet Jerusalem Post that there was a commotion when he arrived at the synagogue. He also shared that people shouted, ran everywhere, and he was told that dozens of people were still inside the collapsed synagogue.

Tubolsky added, "A number of lightly wounded people were near the entrance and civilians led me to a severely wounded man who was lying on the floor nearby, unconscious and suffering from a head injury." 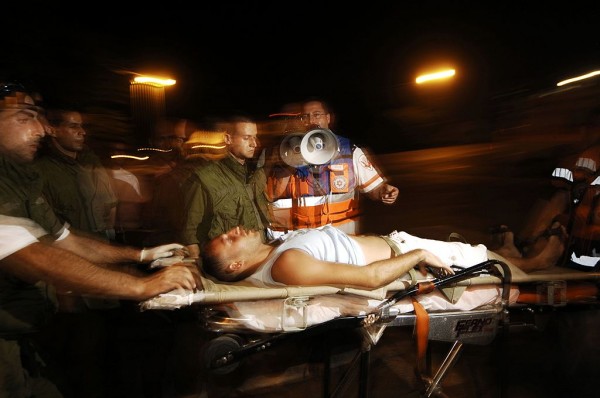 (Photo : Shaul Schwarz/Getty Images)
Israeli emergency personnel rush a wounded man to the hospital following the collapse of a building.

Authorities Say the Construction is Not DoneYet

According to a published article in U.S. News Chant, local authorities found out that the synagogue was held in the building even though the construction was not finished yet. The owners of the building do not also have the permits.

A spokesman for the Israel Fire and Rescue service told a local TV station, "This building is not finished. It doesn't even have a permit for occupancy and therefore let alone holding events in it." Further, the investigation continued to find out who will be held accountable for the said incident.

The bleachers' collapse in the West Bank happened just three weeks after a stampede at a holy festival in Israel ended in a dozen deaths, and more than 100 were injured. On the other hand, the deadly collapsed in West Bank led to the death of two persons, including a 12-year-old boy and a man in his 50's.

Who Should Be Blamed in the Deadly Collapsed at the Synagogue?

On Sunday morning, the Givat Ze'ev local council's fire and rescue services sent an email to the appropriate parties, clarifying that the proposed Shavuot case at the synagogue had not obtained permission due to continuing development of the site.

Doron Turjeman, the Jerusalem district police commissioner, said, "Once again we arrive at an event that involves negligence and irresponsible conduct. The station commander informed the head of the council that this structure is forbidden for prayers and large gatherings."

Moreover, On Sunday evening, police released a document sent from the Lev HaBira station in Jerusalem to the president of the council, which reported that "the incident is not approved according to safety regulations. The local authority must send inspectors and ensure that the incident does not take place."