Joe Biden Plans To Increase Capital Tax Rate to as High as 43.4% On Wealthy Individuals

President Joe Biden would consider almost doubling the capital gains tax rate on wealthy individuals to 39.6 percent to help pay for a slew of social spending that tackles long-standing inequalities, said the people familiar with the plan.

The proposed capital tax rate, along with an ongoing surtax on investment gains, means that federal tax rates on wealthy individuals will be as high as 43.4 percent for those making $1 million or more. The proposed marginal rate of 39.6 percent will be higher than the current base rate of 20 percent, said the sources, who spoke on the condition of anonymity because the proposal has not yet been made public. 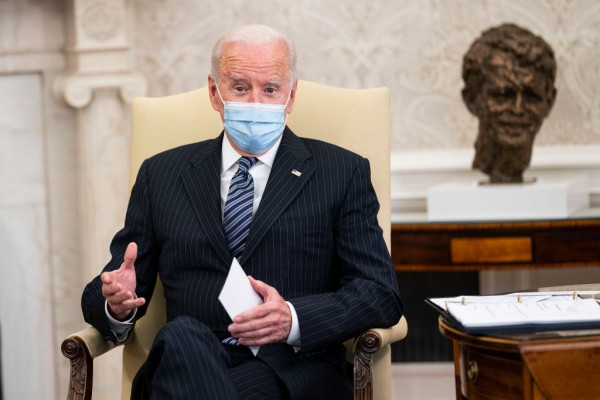 (Photo : Doug Mills-Pool/Getty Images)
President Biden Meets With Bipartisan Group Of Congress Members On American Jobs Plan WASHINGTON, DC - APRIL 19: U.S. President Joe Biden speaks during a meeting with a bipartisan group of members of Congress to discuss investments in the American Jobs Plan in the Oval Office at the White House April 19, 2021 in Washington, DC. Biden has proposed raising the corporate tax rate to pay for his initiatives, which include traditional infrastructure projects as well as a major investment in long-term, in-home healthcare.

According to Reuters, which cited people familiar with the initiative, a 39.6 percent tax will be added to the 3.8 percent Obamacare tax, resulting in a 43.4 percent limit. Biden also intends to raise the marginal income tax rate for America's wealthiest earners from 37 percent to 39.6 percent.

Biden is expected to release his tax policies next week as a means to fund the "American Families Plan," said both publications. The scheme is part of a $4 trillion infrastructure spending plan. This initiative would prioritize childcare and education services, with a reported $1 trillion investment in care infrastructure.

The capital gains tax threshold on long-term assets would increase to 20 percent, making the current rate of 39.6 percent a significant increase. Those with adjusted gross incomes of more than $200,000, or $250,000 if they file together, are subject to the net investment income tax, which helps support Obamacare.

The proposed tax rate would raise taxes on savings above those on incomes and salaries. That will also have a significant influence in wealthier areas like California and New York. According to Bloomberg, Californians earning $1 million or more could face a combined state and federal capital gains tax of 56.7 percent, while New Yorkers could face a rate of 52.2 percent.

Biden initially claimed that no tax hikes would be imposed on those with less than $400,000, mirrored in the new bill. "Biden's priority is in ensuring that people pay their fair share, whether it's businesses or the highest income earners in our society," White House press secretary Jen Psaki said in a March 18 press conference. Biden argues that taxation is an area "where there is a potential to rebalance as our laws are now," Psaki added.

Republicans may be outspoken in their resistance to the step. They've also spoken out about Biden's plan to fund the first infrastructure package with a corporate tax increase, which will boost the threshold from 21 percent to 28 percent. In his 2017 tax bill, President Donald Trump reduced this rate from 35 percent to 21 percent.

The GOP has already proposed its own $568 billion infrastructure plan, which will hold Trump's tax cuts in effect. Biden has long advocated for capital gains tax reform. Though it is not a total wealth tax as Sen. Elizabeth Warren's proposal, Treasury Secretary Janet Yellen has suggested ending the "stepped-up basis" policy for inherited capital gains as a revenue-raising option.

Biden's proposal, which would expand the Internal Revenue Service's funding, could result in greater tax collection for the wealthy. The IRS commissioner, Charles Rettig, recently stated that over $1 trillion in taxes could go uncollected each year and that the country's highest earners may be keeping billions from the agency, Business Insider reported.