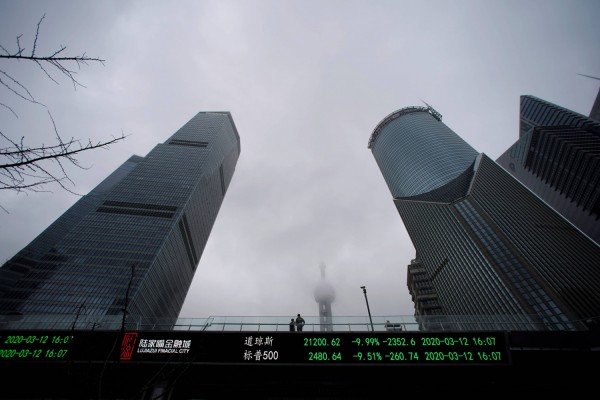 (Photo : REUTERS/Aly Song)
People are seen on a pedestrian overpass with an electronic board showing the Dow Jones and S&P 500 indexes, following an outbreak of the novel coronavirus in the country, at Lujiazui financial district in Shanghai, China March 13, 2020.

After the Monday's economic meltdown when Wall Street suffered huge losses, trading was again halted as the stock indexes reach their upside on Tuesday as stock futures traded higher.

The movement in stock futures followed President Donald Trump's tweet which said that the US will be supporting the industries that were highly affected by the novel coronavirus, including airlines and those in the hospitality business. He also stressed that the US will be stronger than ever in facing these trying times.

The United States will be powerfully supporting those industries, like Airlines and others, that are particularly affected by the Chinese Virus. We will be stronger than ever before! — Donald J. Trump (@realDonaldTrump) March 16, 2020

On Monday, the stock market experienced its worst one-day decline since the 1987 "Black Monday," falling by 12.9%. In connections to this, major stock index Down Jones Industrial Average fell by almost 3,000 points by the end of trading, as fear of continued economic stoppage brought about by the novel coronavirus pandemic.

Media Matters researcher Nikki McCann Ramirez even referred to the roller coaster ride that is the stock amrket in his tweet prompting who needs Disneyland when there is the stock market which seem to be the wildest ride of the planet.

The drastic drop on Monday happened after an attempt by the Federal Reserve to stabilize the economy by cutting interest rates.

On Monday afternoon, President Trump even remarked that the market will take care of itself amid the COVID-19 outbreak, at a press conference in the White House.

As the trading opened on Monday, there was a sudden surge on the stocks that the "circuit breaker" was immediately tripped which suspended the trading for 15 minutes to give the markets a chance to recover from the sudden 7% loss. The second "circuit breaker" kicked in when the loss plummeted to 13%.

The switch that slowed down the economy was flipped as the coronavirus outbreak caused and continues to cause damage in global economies like South Korea, Japan, China and the European Union. The downfall of the world's markets has caused fear in investors that the US economy may be next to crash. Thus, forcing them to not jump back into trading until the coronavirus situation subsides.

There are already at least 4,281 confirmed coronavirus cases in the US with 70 deaths. In response to this, President Trump has said that the administration is already looking at locking down "certain areas" in the country as the crisis can stretch until August.

There have also been several calls for policymakers around the world to offer state support to the corporate sector which is rendered vulnerable by the coronavirus. However, it has been observed that despite the actions taken by policymakers the outcome and effect on the economy is now up to how soon the spread of COVID-19 starts to slow.

The longer it takes until the coronavirus crisis considered under control, it will also increase the risk of a financial contagion.