Justice for J6: Hundreds of Capitol Rioters Show Up on Saturday Despite Warnings from Right-Wing Figures

The organizer of the "Justice for J6" protest in solidarity with the Capitol rioters on January 6 praised the few hundred people who came out on Saturday. 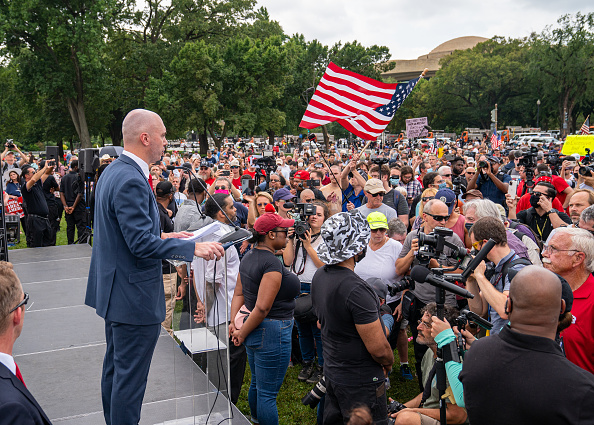 (Photo : Robert Nickelsberg/Getty Images)
Matt Braynard, left, rally organizer and executive director of Look Ahead America, speaks to the 'Justice for J6' rally with supporters of those charged in the January 6 attack on the U.S. Capitol.

The Organizer of "Justice for J6" Thanked Those Who Appeared

In a recently published article in Newsweek, Matt Braynard, the organizer of Saturday's protest in Washington, D.C., addressed the approximately 500 people who attended and calling those who were suspicious of the gathering "a bunch of clowns."

Braynard posted on his social media account, "Thank you to the @CapitolPolice, @DCPoliceDept, Park Police, and other security services that kept our attendees safe today. And thank you to the 500 courageous patriots who came out today despite a bunch of clowns and dilettantes who tried to convince you it was a trap."

Several major far-right Facebook groups and extremist sites, including TheDonald and 4chan, urged protestors not to attend the demonstration, claiming that it was a covert government plan to conduct arrests and monitor protesters. On Thursday, even former President Donald Trump labeled the gathering a "set-up," according to a published article in Daily Advent.

Former President Donald Trump said before the rally that Saturday's event is a set-up. Trump said, "If people don't show up they'll say, 'Oh, it's a lack of spirit.' And if people do show up they'll be harassed," according to a published report in Fry-Electronics.

Trump did not attend the event but stated in a statement on Thursday that his heart and thoughts are with the individuals who have been unjustly punished in connection with the January 6 protest against the Rigged Presidential Election.

Furthermore, Both Capitol police and lawmakers were unsurprised by the poor turnout on Saturday. According to Democrat Ted Lieu of California, the rally's poor attendance indicates that Trump's influence on the GOP may finally be waning.

The Peaceful Rally on Saturday Afternoon

The protest was held with tight security on Saturday afternoon, with law enforcement preparing for the event by erecting a temporary fence and increasing police presence. Police reported four arrests by the end of the day, including one guy with a knife and another who seemed to have a pistol. Two more people were apprehended on felony warrants out of Texas.

In a published article in OlxPraca, before the protest, Braynard, a former Trump campaign worker, told Newsweek that the gathering would be "100%" nonviolent to express solidarity for Trump supporters who were detained and charged during the January 6 uprising. In the six months after the deadly Capitol assault, nearly 600 individuals have been arrested.

Braynard told a news outlet that they support legal prosecution and quick prosecutions for everyone who participated in the violence on January 6, and they strongly condemn their conduct. They are fully working with various police agencies to ensure that everyone is safe. Anyone planning on committing violence is not welcome at their protest.